Imagine strolling around snow-covered wooden chalets scattered all over the city.
While sipping on a cup of mulled wine and watching quaint half-timbered houses lit up with thousands of festive winter lights.
The scent of choucroute here, the savour of flammekueche there…
This is Strasbourg during Christmas time.

Located on the eastern border of France with Germany, Strasbourg is charming at any time of the year. Since 2014, we’ve visited the capital of Alsace more than ten times and at all four seasons. Our verdict: Christmas time is definitely the most unique moment to explore Strasbourg. Here are 7 reasons why.

1. Strasbourg is home to the oldest Christmas Market in France, and probably of Europe

Christmas markets originate in the German-speaking parts of Europe and go back to the Late Middle Ages. The one in Munich dates back to 1310, and is often considered as the oldest one in Europe.

However, there were forerunners of Christmas markets in Europe dating back much earlier. The Krippenmarkt (Crib market) in Vienna for instance opened in 1298. While the Klausenmärik (Saint-Nicolas market) in Strasbourg even goes back to the 12th century. The reason, why at that time Saint-Nicolas Day on the 6th of December was more important in Strasbourg than Christmas, is because the region of Alsace was still Christian in the 12th century. Strasbourg became Protestant only in 1529. And in 1570, Johannes Flinner, an intransigent preacher at the Strasbourg Cathedral, decided to erase all references to Catholicism in the city. He abolished the Klausenmärik, and replaced it with a Christkindelsmärik (Baby Jesus Market) instead.

Therefore, if we take into account the city’s history and the existence of a Klausenmärik as an antecedent of nowadays Christmas markets, then Strasbourg’s Christkindelsmärik can well be considered as being the oldest Christmas market in Europe.

2. The Strasbourg Christmas Market is one of the largest in the world

In the Middle Ages, Strasbourg’s Christmas market was held in front of the Cathedral. And it was openend only during 3 days prior to Christmas Eve.

But from the mid-19th century onwards, the Christkindelsmärik expanded more and more over the whole city of Strasbourg, and was extended to 36 days. Little by little, stalls were set up at the Place Kléber, the Place d’Armes, the Place des Halles, the rue des Grandes-Arcades and the Place Broglie.

Today, the Christkindelsmärik is still opened for over a month long, from the last week of November until the last day of December. With over 300 wooden chalets spread over 11 sites in the historic city centre, Strasbourg’s annual Christmas market is currently one of the largest in the world.

There are zillions of choices of gift ideas from home decorations to custom clothing, vintage furniture and crafts made by sustainable and responsible local organisations. Truth be told, after all these years, we still don’t know if we have really seen each and every one of the stalls or not. This is one of the reasons why we keep going back to Strasbourg during Christmas time.

3. Strasbourg’s Christmas Tree: the star of the Alsatian capital

Since we both grew up in a Christian country, we can’t imagine Christmas without a well-decorated Christmas Tree. And neither does the city of Strasbourg…

In fact, the tradition of decorating a Christmas Tree is believed to come from the capital of Alsace. The first record of a City Christmas Tree as we know it today dates back to 1604 in Strasbourg.

The one on the Place Kléber is a 30-meter high fir tree adorned with over 7 kilometres of twinkling fairy lights. It is the heart and the symbol of Strasbourg during Christmas time.

When we were visiting the city for Halloween, we were surprised to see so many locals watching excitedly the arrival of the Christmas Tree on the Place Kléber. It turns out that every year the French National Forestry Office starts to search for the perfect tree for Strasbourg as early as March. And it takes no less than 200 man-hours to prepare the tree once it is set on site. First they need to impant hand-picked branches of other trees to give “the star” a fuller appearance. Before they decorate it with baubles, angels and flashing lights.

One thing is sure: the city of Strasbourg is proud of their Christmas Tree!

4. Strasbourg’s got the most original Christmas illuminations

Paris might be the City of Lights. But Strasbourg’s illuminations during Christmas time are much more stunning.

Every time we arrive in Alsace’s capital for the winter holidays, we’re mesmerized by the city’s “Gate of Lights” at the Rue du Vieux-Marché-aux-Poissons. Two giant bears made of twinkling light bulbs, bound by a star hoop sparkling with white and gold, invite Strasbourg’s visitors to dive into the magic of Christmas.

In the historical centre, we have to slow down to marvel at the stars, angels and snowflakes that garland the cobbled streets. The façades of the half-timbered houses around the Cathedral all sport giant wrapped presents, seasonal teddy bears or gigantic gingerbread men. Every window, balcony and even church twinkles with thousands of lights and Christmas decorations.

Other than the famous Christmas Tree on the Place Kléber, our favourite Christmas illumination in Strasbourg is the 10-metre-high blue tree that stands on the Place Gutenberg.

5. The Notre-Dame of Strasbourg holds an exceptional Astronomical Clock and one of the largest Nativity Scenes

We’re both agnostics. But as lovers of architecture and history, we always like to visit sacred buildings when travelling. As much as we love exploring palaces and castles. The Notre-Dame Cathedral of Strasbourg is actually among our favourite architectural gems in Europe. And we have spent many hours examining the details on both the outside and the inside of this medieval masterpiece.

In fact, what is interesting are not only the Cathedral itself and the Gothic sculptures. But also what this building holds inside.

First of all, this would be the Astronomical clock built in 1843, located on the right side of the altar. Listed as a national monument object in 1987, this Renaissance masterpiece features a perpetual calendar, a mechanical model of the solar system (with the real position of the sun and the moon), and even the solar and lunar eclipses.

The other gem that is displayed inside the Notre-Dame de Strasbourg is the annual Nativity Scene. Measuring about 20 metres long, this splendour is actually one of the largest Nativity Scenes in France, and is of course only exhibited during Christmas time.

The crib was acquired in Bavaria by the canon Eugène Muller in 1907. But many figurines have been added since then. Apparently, a new piece of decoration is added once a year. Thus making this Nativity Scene an ever-growing piece of religious art.

Located in France but only a few kilometres away from Germany, Strasbourg was a German city until the 17th century. And again during WWI and WWII. Due to its unique location and history, the capital of Alsace is therefore immersed in both French and German cultures.

In terms of food, France has hundreds of mouth-watering specialties that you should try at least once in your life. But Strasbourg particularly, is a true paradise for food lovers! In fact, this city offers the perfect blend of French sophistication and German gluttony. While Alsatian dishes are absolutely delicious, they are quite rich and heavy. Therefore, it’s best to taste them in winter.

Whenever winter is knocking at the door, we love to drive down to Strasbourg to feast in one of the many traditional Winstubs, may it be a foie gras or escargots, followed by a succulent choucroute, a crunchy Flammekueche or a Baeckeoffe (traditional Christmas dish in Alsace).

While wandering through the Christkindelsmärik, we always buy a piece of strong smelling Munster cheese. But also dried fruits in every Crayola shade, gingerbread, bretzels… And of course tons of homemade cookies, each branded with a poetic name and taste: flavored with aniseed, sprinkled with cinnamon, glazed with sugar, or shaped like stars. To all the foodies out there, Strasbourg in Christmas time is your paradise!

7. Strasbourg has the greatest choice of original holiday-seasoned drinks

Christmas time in Europe goes hand in hand with hot mulled wine. In France, it’s called vin chaud, in German-speaking countries Glühwein, and in Scandinavia it’s Gloog. But whatever it is called, hot mulled wine is an absolute must during Christmas time. In Strasbourg, it is served steaming hot from copper cauldrons. May it be at the Christmas markets or in one of the many restaurants. The red wine is mixed with honey or citrus fruit, and spiked with spices like cinnamon, aniseed, nutmeg and cloves.

Strasbourg also sells a special Christmas drink that cannot be found in any other French city: the Lait de Poule. It’s actually a traditional eggnog, but unlike the ones sold in Luxembourg, Germany or in the United States, it’s homemade and infused with strong alcohol like brandy, rum, eau-de-vie or kirsch (a liquor made from cherries).

And finally, there are also many special craft beers that can be found in Strasbourg during Christmas time: rich with malt and fragrant with spices. Kerstin’s favourite is the Cervoise, which was already a holiday season hit in the Middle Ages.

With its rich history, magical decorations and all the delicious food and drinks, Strasbourg can rightfully be called the Capital of Christmas. Do you agree? 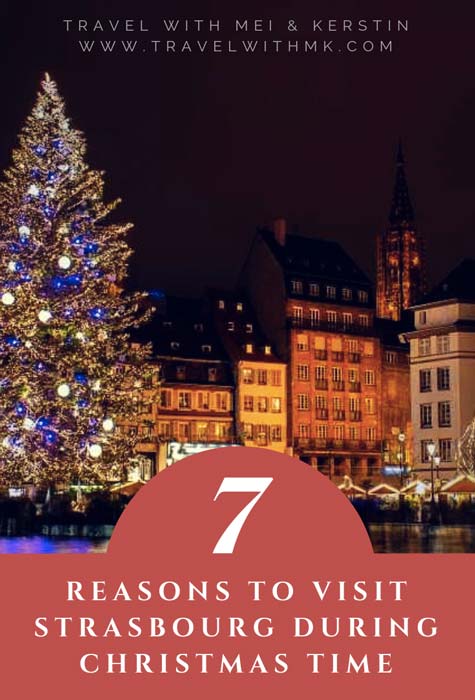 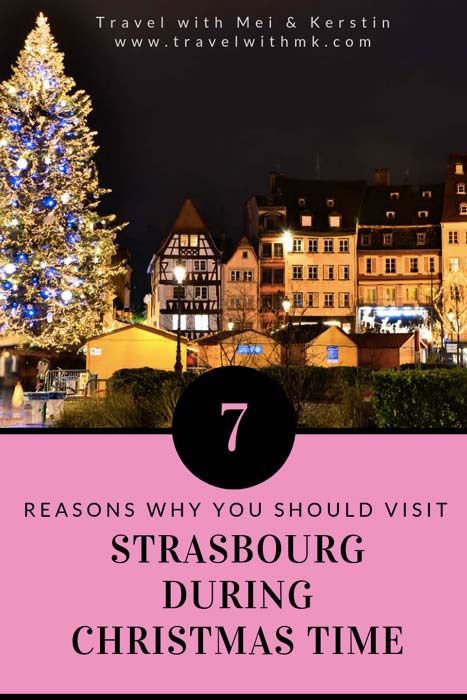 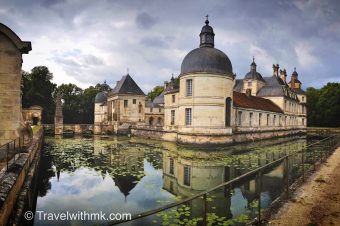 The grey sky was lightening up as we were racing through... Read More 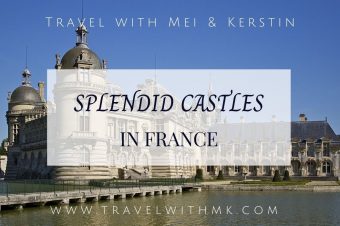