A little gem among the Cyclades islands (with a violent past)

It took the ferry eight hours to bring us to Santorini from Athens. As we docked at the ferry port of Santorini, we gazed at a 300m high steep cliff. The view is impressive from afar, but is even more remarkable when standing at the foot of the rock face, especially when you imagine what cataclysm formed this rocky escarpment. You immediately get a sense of a huge natural power that cut right into the island mountain, creating all those white-crimson-cobalt layers of sheer cliff edges.

Known as Kalliste – “the most beautiful one” – in Ancient Greece, Santorini is actually just a fragment of a formerly much larger circular island in the southern Aegean Sea. According to Herodotus, the island’s first name was Strongili, meaning “the round one”. But one of the most catastrophic volcanic eruptions in history split this round-shaped island into several parts at the end of the Minoan period (around 1600 BC). Imagine hot gas-charged magma bursting up from the depths and scattering hot ashes all over the world to as far as China and Antarctica. Imagine the noise of collapsing structures, as tides of water and huge pillars of ashes showered down on earth. It turned much of the world dark.

When the sulfuric mist settled down, the landscape had completely changed. Volcanic sculpture you may call it. Instead of one island, suddenly there were five: the three currently uninhabited islets – Apronisi, Nea Kameni, Palaia Kameni -, the little island of Therasìa with its 100ish residents, and the crescent-shaped cluster Thira, commonly called Santorini.

We were disembarking, when several Santorinians approached us and asked if we needed a hotel. They pressed photos into our hands, told us the nightly rates and that shuttle service was included in the price. A tourist scam? Perhaps. But hey, we needed a hotel anyway. We followed one of the guys and ended up at San Giorgio Villa, right in the center of Fira, the modern capital of Santorini.

Other guests who stayed at this bed & breakfast recommended us to watch the sunset in Oia. According to their guidebook, we just had to walk along the cliffs for about half an hour. And so we hit the road… 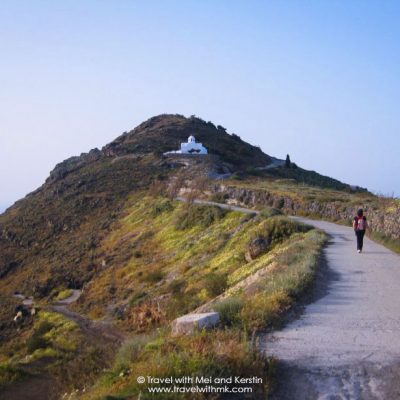 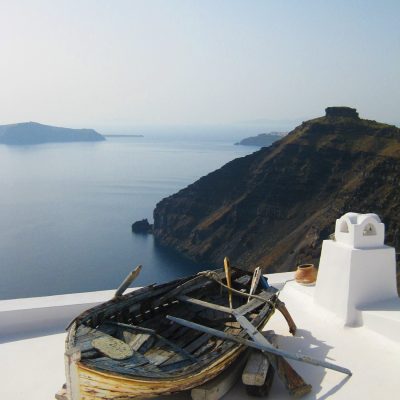 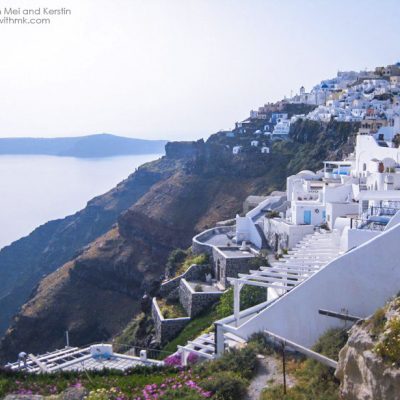 Maybe we stopped too often to admire the dazzling panoramas, or perhaps we were just very tired. Two hours later, we were both thirsty, hungry, dehydrated, and our feet were sore. The sun began to set, and there was still no sight of Oia. A local man on his way home told us that the town is located “behind two other mountains”. We’d better catch a bus or something… Following his suggestion, we climbed over a hilly private ground to reach the highway. After hitchhiking for a while, a local bus stopped in front of us. You going to Oia for sunset? We nodded. Then come quick.

It didn’t take the bus very long to get to Oia, but to us it seemed like an eternity. The driver threw the doors open before the bus even came to a standstill, and shouted: up the street for the sunset! The other two passengers rushed by, and so we followed them through the narrow cobbled streets.

In the 16th century, Oia was known as Apano Meria, meaning “the upper side”. This town is also perched on top of a steep cliff created by the Minoan volcanic eruption. But unlike the island’s modern capital, most of Oia’s white and blue painted houses are built into niches carved into the rock and facing the idyllic caldera.

The windmill next to the Sunset Serenade point is probably the most popular building in Oia. It appears on postcards, tourist brochures and magazines so often that it looked almost unreal to us as we observed it from the Byzantine castle ruins. A dozen tourists were preparing their cameras, and the place was soon packed with spectators waiting to relish the most famous sunset in Europe. Most of them kept quiet though, trying to exchange their thoughts in whispers and to capture every second of the scenery, as if the sunset from Oia was sacred. But as cliché as it might seem, we must say that the sundown was truly sublime. We were mesmerized by the changing hues of the sunbeam sparkling above the Aegean and dancing on the whitewashed buildings of the island.

However, the sunset was not the main reason why we traveled to Santorini. We wanted to explore the prehistoric town of Akrotiri, the island’s Minoan archaeological site. Like Pompeii in Italy, this settlement was buried and frozen in time by the solidified ash of the volcanic eruptions. As a result, the vestiges of the Minoans’ life have been very well preserved, such as the exceptional frescoes, the elaborate drainage system, the paved streets and the sophisticated multi-storyed buildings from the Bronze Age. But unlike in Pompeii, no human skeleton has been found on Akrotiri. This suggests that the inhabitants of Thira were able to flee the island shortly before the eruption, and were presumably warned by an earthquake.

As we explored the archaeological site bit by bit, I had to think about Wilhelm Jensen’s novel “Gradiva”, and the protagonist’s fantastical dream of meeting a lady in Pompeii during Vesuvius’ eruption in 79 AD. For a moment, I time-traveled back to 1600 BC, thought I felt the ground shaking, and saw flashes of desperate men, women and children fleeing for their lives… 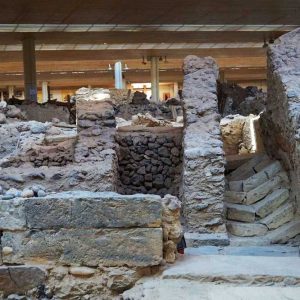 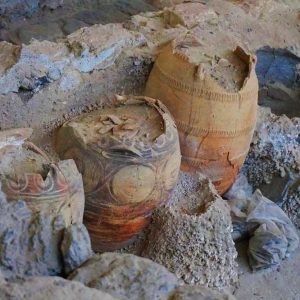 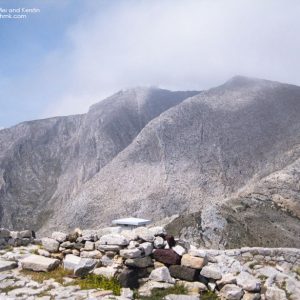 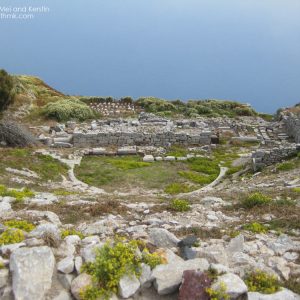 My journey through history shoved me to another era, as we later explored Ancient Thira, a city inhabited from the 9th century BC until the 8th century AD. Following a winding cobbled path, we slowly hiked to the ancient city, located on top of the steep Mesa Vouno mountain. With an altitude of 369 meters, this ancient settlement was undoubtedly a natural fortified spot. This is why the city was used by the Ptolemies to install their garrison post around the mid 3rd century BC. Thanks to the roads built by the Spartans, one could easily reach Perissa and the ancient port of Kamari, two villages at the base of the mountain, which are now famous for their refined black beaches.

On the last day of our trip, we explored the medieval village of Emporio, recognizable from afar by its blue-domed churches. We visited the bell tower of Panagia Messani Church and the fortified castle, which stands on top of a hill in a precarious equilibrium. As the sky was turning grey, we hit north to explore the lesser known area of the island, driving along vineyards, little round windmills, and traditional villages. 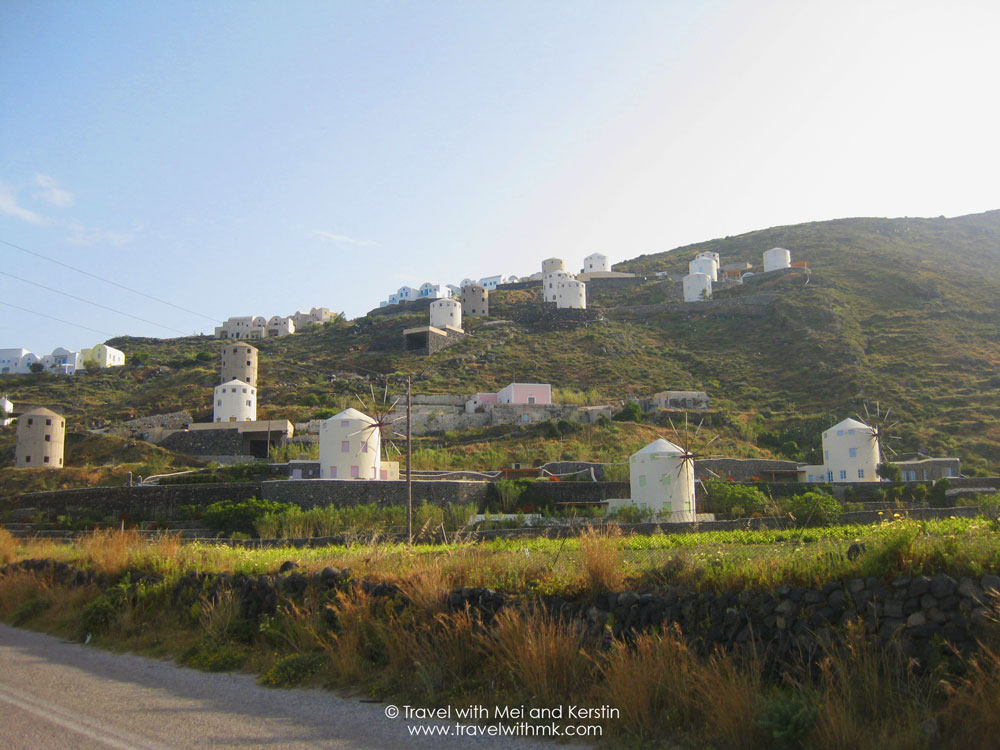 One thing is sure: with its 73 square km, Santorini might be a small island. But there is more to discover than the romantic sunsets and multicolored cliffs. During our short trip in Santorini, we met several expats from France, Germany and the UK who quit their job to settle in this famous honeymoon destination. Who knows, maybe one day we too will relocate to this little gem among the Cycladic islands… Let’s just hope that the still active volcano won’t erupt anytime soon…

If you like Santorini, you might want to learn about these 20 Best places to visit in Greece. 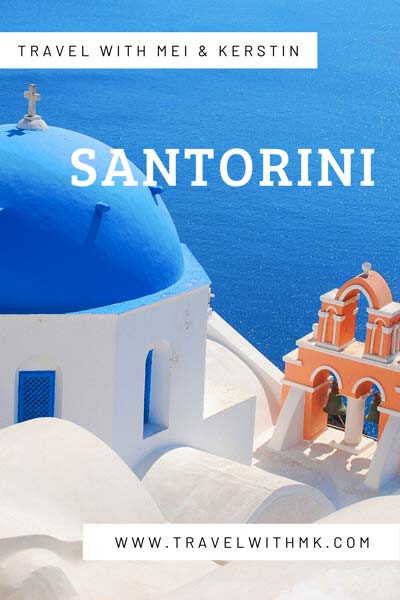 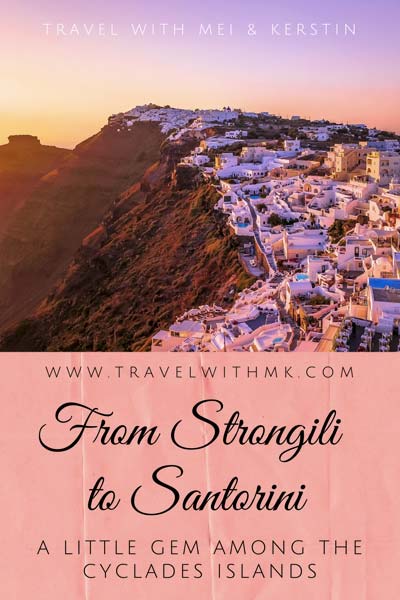 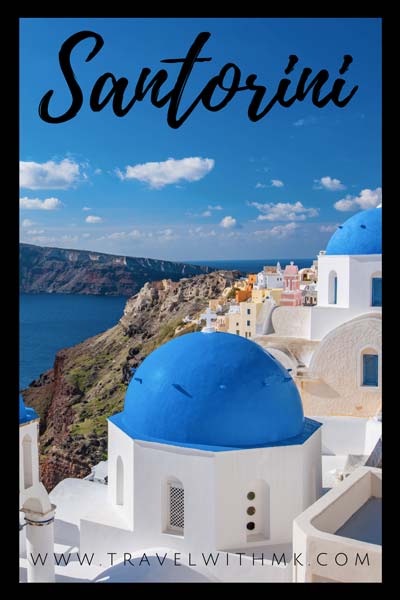 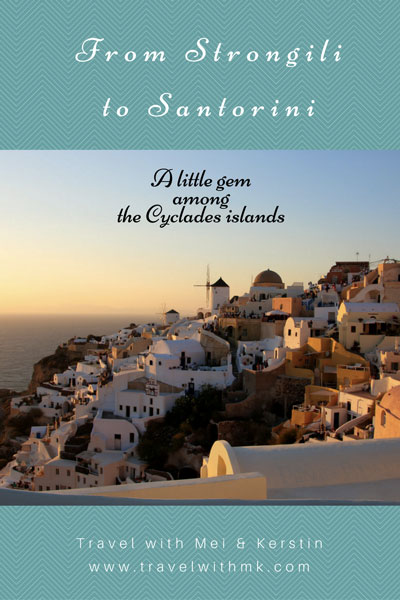