An Unexpected Afternoon in San Francisco

If there was ever such thing as an artist’s bible, it should be Van Gogh’s Letters written to his brother Theo. – Chris Duke

Life is full of surprises, and you just never know what happens. Not so long ago, we were strolling around Alamo Square in San Francisco. Two blocks away, on the corner of McAllister and Steiner, a dozen hand-painted window glasses caught our attention.

No, this is not a garage sale. These are definitely artworks and the artist’s studio was clearly just down there in the basement of a Victorian house. The door was open and there were many other paintings inside. We were wondering whether the studio was open to the public, when Chris Duke showed up. He invited us in to take a look at the painting he was working on: a panorama of San Francisco’s skyline painted in broad strokes on a long horizontal window glass. Next to this eccentric cityscape stood a dozen more discarded antique Victorian windows, all richly painted.

While we were still marveling at his authentic artworks, Chris Duke picked up a wooden hand-made accordion. He closed his eyes, hit a few notes, then explained that his instrument was made out of a discarded drawer. Seeing that we were all eyes and ears, he offered us to follow him to his backyard. We settled in, and he started rolling a joint.

You see, I started painting a long time ago. At first, it was on canvas. It had always been on canvas like for everyone else. But one day, about 15 years ago I think, there was no canvas left in my stack. But instead I found a discarded window glass. I needed to paint, I really needed to paint, and all I had was an old window. And so I used it, I painted on it. When I finished that new piece, I turned the window around and thought wow! The colors were so much more intense on glass. I loved it!

And since then, painting on window glasses has become Chris Duke’s main signature. He also keeps painting on the reverse of the windows, without looking at the front side until he is done :

If you’re painting on canvas, you’re monitoring the whole thing from the beginning until the end. But if you paint on the reverse of windows, you can’t picture the result until you consider it to be finished. And when you turn around the window, the outcome is always different…

Just like the 19th century painter Van Gogh, whom he greatly admires, Duke paints from memory, and paints what he feels, not what he sees. Onsite, he sketches and locates the landmarks, such as the Transamerica Pyramid, the Telegraph Hill and the Bay Bridge in San Francisco. Once at home, he paints the city the way he remembers and feels it. 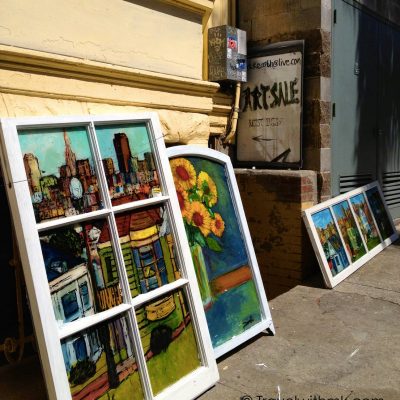 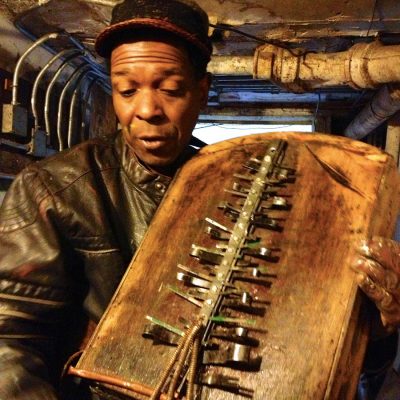 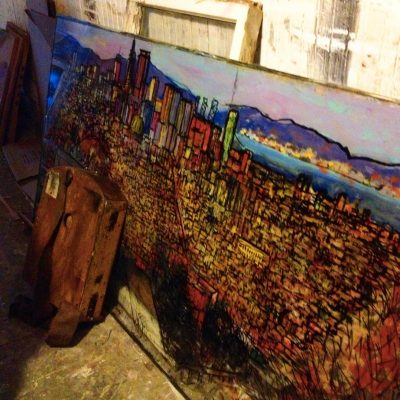 But Chris Duke is not just a painter. He is also a musician. In fact, he started his career as a musician in Louisville, KY, where he grew up with his 13 brothers and sisters. His father, “a great man”, a priest, was also a musician. Duke and his siblings played music all the time. And today, he still plays music whenever he is not painting. He plays at home, in his (beautifully wild) garden, but also when walking down the streets.

When we asked him where he gets his creativity from, Duke smiled and said:

People should reach in… It’s all there, inside of you. You just gotta tap into that well of yours. I don’t know whether I’m a great painter or not. What really matters is that you do what you love, and love what you do. Art comes from love and generosity. You just have to offer it to the world. Either it takes it or leaves it. Just as simple as that.

And just as simple as that, he offered us a beautiful song before we left: “No one can tell you…” 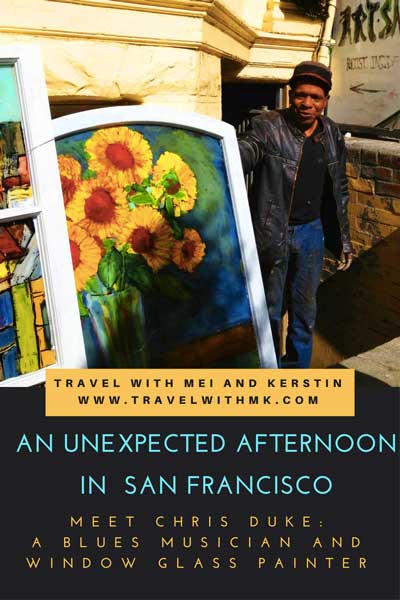 Remember to drink a cup of freshly-squeezed orange juice at the... Read More