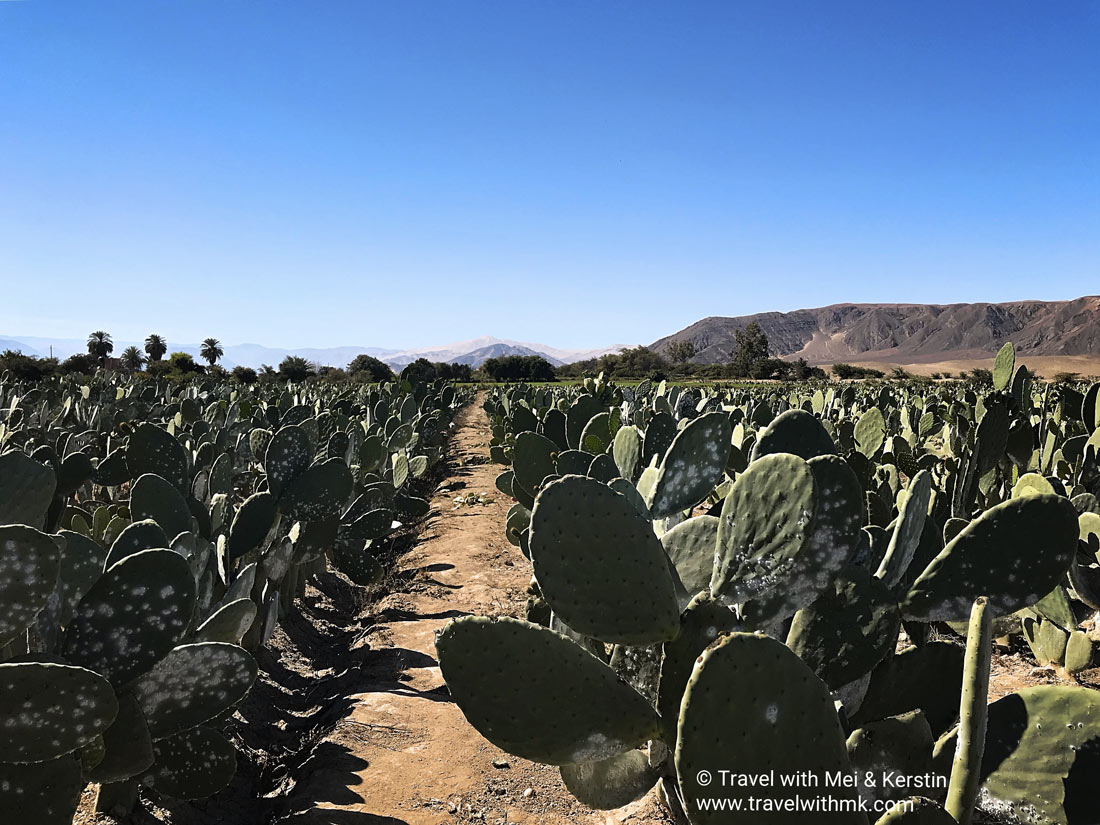 We were driving past a cactus field in Nazca when our guide suddenly pulled over the vehicle. Come, I want to show you something, he said. The other couple in the car seemed to hesitate for a moment, but the driver already opened our door.

We followed our guide down into the cactus field, where he stopped after a few meters. He put on a glove and pulled out a knife from his jacket’s pocket. The lady next to me took a swift step backward, and I let out a “wow”! Obviously, louder than expected.

No, no, don’t worry! It’s for the cactus! He laughed apologetically and pointed his knife at the white powders on the pads of a cactus. Look, I just wanted to show you that these white powders are used for dyeing. And also as a colorant for food, cosmetic and pharmaceutical products.

Hmm.. and why does he need a knife to show us that? From the puzzled look we gave him, he probably understood that we had no idea what he was talking about. So he gave us a big smile. Stripped off his glove, then scratched off some white powder from the cactus pad with his knife. He put it in the palm of his hand, and said: now, let me show you the before-and-after effect.

I got my camera ready, and the other couple did the same. He raised his index finger and gently pushed on the white powders. Puff! The white powders turned into a carmine red liquid. Eww!

This is liquid, he explained. NOT blood. The white powders are actually insects, called cochineals who absorb the liquid of the plant. To gather the red color, you just need to gently cut off the insects from the pads of the cacti and collect them to use for carmin dye. This method is used in Central and South America since the 15th century. And today, Peru is the largest exporter of cochineal.

Our guide took a few steps further, and cut off a piece from a cactus pad. This is the fruit of the plant called tuna. Nothing to do with the fish though… The spines of this fruit are very sharp, so you have to be careful when you want to open the fruit. He put on his glove again, and peeled the fruit with his knife. Inside, the juicy fuchsia fruit looked as beautifully red as the squeezed cochineals in the palm of his hand.

Actually, tuna fruit also grows in the Middle East and in some parts of Europe, especially in Greece, Andalusia, Sicily and southern Portugal, where they are better known as prickly pears. Ah! Prickly pear! Yes, I know them, I said. We have that too in Europe. Do you want to try, he asked. Right from the first bite, I realised that the Peruvian tuna fruit just cannot be compared with the prickly pear I know from Europe. This one in Peru tastes so much sweeter!

Standing in the middle of the desert of Nazca and eating a carmin red fruit called tuna, everything suddenly seemed surreal to me. It was only our fourth day in South America, but the Inca mummies we saw at the Chauchilla Necropolis, the sand buggy drive we did around the oasis of Huacachina, and the indigenous people we had met in Peru so far were already soul-stirring.

When we planned our trip, I knew that it was going to be a thrilling one. But standing there in the middle of a cactus field, only a few kilometres away from the world famous Nazca Lines, it suddenly hit me that we were going to have the experience of a lifetime in Peru and Bolivia. That this one-month long trip would be completely different from any other we had done before. And all that intense feeling and awareness just by biting into a fabulous red cactus fruit… 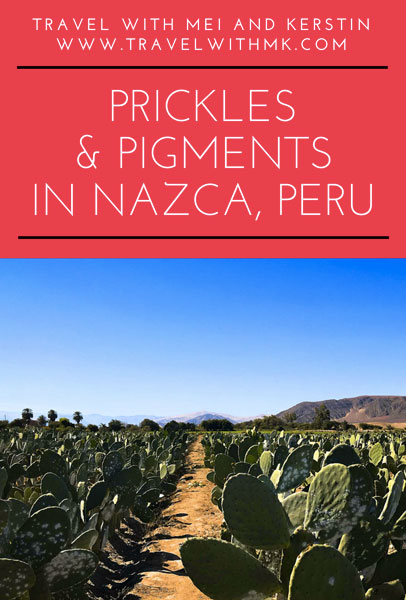