“You want to hear the story about Huacachina?” I wasn’t sure what to expect from this lady who approached me, saying that she’s a direct descendant of the Incas. Since it’s important to be open-minded, I nodded. “Sure!” I smiled expectantly. “You see the lagoon in front of us?”

From afar, the Peruvian desert town of Huacachina shimmered like fire. It looked as if the oasis was surrounded by dazzling whiteness. But as we neared Huacachina, the sand scenery revealed itself to be steeped in golden waves of sand and circular dunes. The town looked lush with palm trees and harangos.

“So, this is how the legend goes… There was once a young Inca princess called Huacay China. She had beautiful green eyes and thick black hair. One day, while carrying a jug to the fountain, she encountered the young warrior Ajall Krina. He was fearsome in battle and very proud. They fell in love and promised each other to never be separated.

However, one day, an emissary from Cusco arrived to send the best warriors to war up north and defend the Incan throne against the rebels. Ajall Krina fought fiercely and killed many, but finally succumbed himself. On hearing the news, the princess fell in despair. Her beloved one was dead. There would never be another happy day in her life. Inconsolable, she returned to the fountain where they had met and wept endlessly, day in, day out, until one day a lagoon had formed with all her tears. She then jumped into the water and turned into a mermaid. Legend has it that each new moon night, Huacay China’s lamentations can be heard, as she emerges from the lagoon to mourn her beloved one.”

The Incan descendant paused to watch my reaction. She must have noticed that I was emerging from a dream-like kind of state. “You like my story?” “Yes, I do. A lot. Thank you so much for sharing this legend with me!” I suddenly realized I had been so absorbed by her tale that I hadn’t noticed the constant roar of the dune buggy engines. Those monster cart engines that we were supposed to take in a few minutes. I thanked the woman again and ran after Mei, who was already heading to the sound of whizzing.

I must confess that I knew we would have fun zipping around the gigantic desert dunes for an hour. But I had not expected to have SO MUCH fun! The dune buggy excursion was a wild ride! When we climbed into the vehicle right next to the driver, I wondered why there were security belts like you would expect them on roller coasters. I imagined we would be driving fast, but a regular safety belt would be sufficient to keep us safe.

A tingle of excitement spread through my body. I glanced at Mei, who was camouflaging her mouth and nose in a bandana. For a second, I wondered whether she had told me everything about this ride, whether she was aware what was really ahead of us. But before I could ask her, the driver jumped into the buggy, started the engine and stepped hard on the gas. We literally made a leap and instantly sped towards the desert.

As we ascended the first dune, I was still convinced that this was going to be a mild adventure. How wrong I was! A few minutes later, I was screaming my lungs out as we were making almost vertical drops. The composure of the driver stood in shocking contrast to the pulsing of my ear-piercing screams. Actually, I have never screamed so loudly in my whole life. And I have never had so much fun doing it too!

As we raced, motor struggling, up to the crest of each sand hill, the driver would slam the brakes, let gravity tip us, and blaze the engine again so our heavy bottom wouldn’t send us toppling to our death. We drifted through an amber-golden sea of sand. The cerulean sky seemed to melt into the slopes of sand-walls in the distance. As far as the eye could reach, the desert stretched and seemed to absorb us with each drop, only to spit us out again like a lion playing with its prey.

In addition to zipping around the gigantic desert dunes, the tour also included sandboarding. The driver hit the brakes again and we stumbled out of the buggy, still gasping and gaping. He hurled a few freshly-waxed boards in front of us and asked who would go first. I must confess that I quickly turned to admire the dazzling panorama.

While an Australian lad lay belly down and got ready to glide down the sand mountain, I listened in to the deafening sound of silence. When he finally started sliding, we could literally hear every crunching of every single sand grain.

I brushed Mei’s hand and realized that she too was connected to the infinite golden silence. We can only imagine how easily the sand dunes transport Huaca China’s weeping on new moon nights… 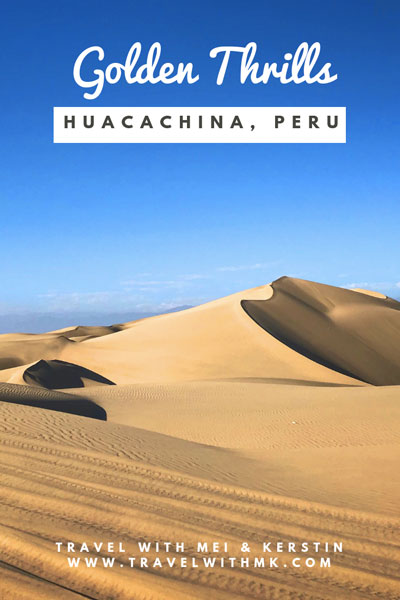 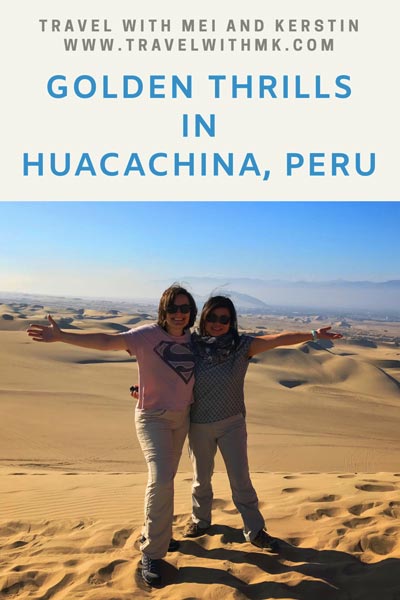