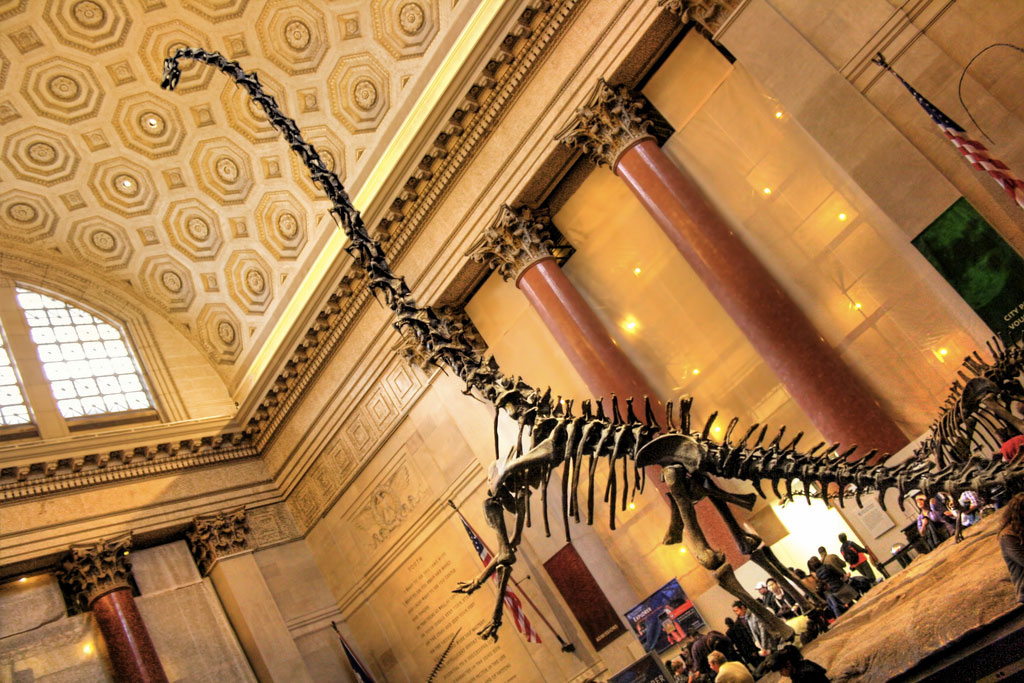 Founded in 1869, the American Museum of Natural History in New York City sports a typical late 19th century Neo-Gothic architecture. At the main entrance on Central Park West, we look up at the equestrian statue of Theodore Roosevelt.

A display of white supremacy?

Roosevelt sits snugly in a saddle in full hunting attire (as an advocator for wildlife conservation, go figure!). He grasps the reins of his horse and reaches back with his right hand as if to grab his gun, which he wears in a holster around his waist. He is flanked by a “Native American” and an African, both standing next to his horse. Symbolically, the autochthons clearly occupy an inferior position here!

What makes us even more uncomfortable is that this bronze sculpture was not erected in the 19th century, but was actually a later addition created around 1939-40 to be precise. Truth be told, we’re not sure what to think of this display of white supremacy in front of a temple of knowledge…

Along with the crowd, we follow the monumental steps, which lead us into a vast Roman basilica. There we stumble upon a cast of a skeleton of a rearing Barosaurus… and the tickets admission. We soon learn that tourists and locals alike make the mistake of believing that the posted entrance fee is mandatory. But if you read in detail, you’ll notice that in most cases these fees are actually “suggested” and not required. Of course we encourage you to donate to the museum as much as your income will allow you, but it can’t hurt to know that you do have a choice. 😉

Too big to fit in a room!

After wandering through the fossil halls, past Tyrannosaurus Rex skeletons and multiple Ornithischian Dinosaurs, all relics of an antediluvian world, we come face to face with a gigantic skeleton which nearly knocks our socks off: the Titanosaur… It is so big that it doesn’t even fit in the room. And his head and neck peek out of the room’s entrance as if he was put there to scare the visitors. Although we like to think that he’s there to greet us. Because after all, this giant creature was an herbivore and survived on plants alone, even if it measures over 122 feet long and weighs about 70 tons.

We continue to the mammal halls, where most specimens were acquired during expeditions in the 1920’s and end up in the environmental halls, where we admire stuffed animals that are preserved in a slightly dramatized setting. Here, the animals are displayed in a specific environmental context, and not exposed on a glass shelf with a neat label. Hence, we find this method of exhibition much better than the one at the Natural History Museum in Paris, where we have spent many happy hours though.

“Treat the earth well. It was not given to you by your parents, it was loaned to you for your children”

This Kenyan proverb sets the tone for the majestic Hall of the North American Forests, where a cut slice of a giant sequoia trunk offers a glance at more than 1,400 years of history. Having visited Sequoia National Park in California a few years ago, we still stand aghast in front of this majestic tree ring! Until it was felled by lumberjacks in 1891, the ancient sequoia – also called “Mark Twain Tree” – was more than 300 feet tall. Impressive, isn’t it?!

Right behing us, a screaming kid is thrashing about on the floor, punching at everything that he can reach. His mum is hovering over him. But her soothing words are drowned by his shrieks. Soon, a circle has formed around the kid. Somehow, we regret that the kid’s show is getting more attention than the sequoia. It’s been growing for over 1000 years and admired for over 100 years. How many tantrums has it witnessed? Probably too many to tell. And yet here we are gazing at an outburst which will be over in a blink of the eye.

Mei could have sworn that she spotted someone taking out his IPhone to document the scene. Probably the next big hit on Youtube? Which will again last a blink of the eye… Slightly irked, we decide to leave the room still filled with screeches and protest, and make our way to the Milstein Hall of Ocean Life, which focuses on marine biology, botany and conservation.

A blue whale model is hanging from the ceiling inside the fully immersive marine environment. Eight ocean ecosystem displays make us travel underwater from the rainbow-colored Indo-Pacific coral reefs to the flickering luminescence of tiny fishes in the eerie darkness of the deep sea. A fascinating trip to the unknown!

Diamonds are a girl’s best friend

By the time we enter the Harry Frank Guggenheim Hall of Gems and Minerals, our feet are sore. But the enigmatic lure of the mood-lit room and its sparkling gems wins us over. It’s actually unbelievable that there are 100.000 pieces of gems exhibited in this hall! We gape at the radiant luster here, the fluorescence there, at sword and bubble shapes, and learn about the polishing, cutting and carving of stones.

Amongst the most celebrated pieces is the Patricia Emerald, a 632-carat, 12-sided stone, discovered in the 1920’s in a mine in the Colombian Andes. Also, there’s the 563-carat Star of India, discovered in Sri Lanka over 300 years ago, and believed to be the largest sapphire in the world.

As we finally leave the Natural History Museum, we see that New York City has been severely hit by a thunderstorm. The sky is clearing up, but ripped branches and leaves form a thick carpet on the floor, with multiple mud puddles. Mei nudges me with her elbow: “How about that? We were saved by the museum!” 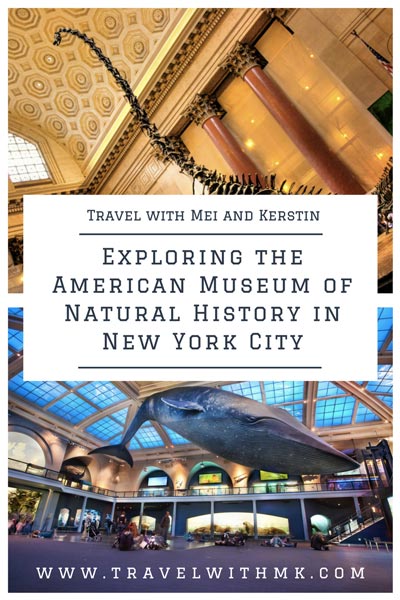 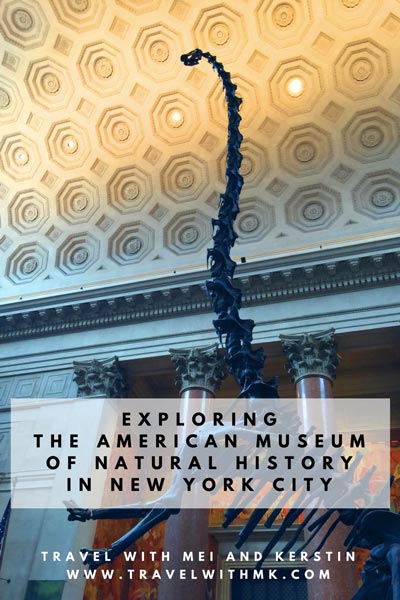