Hiking through the Valley of Fire in Nevada

Or how we made a startling encounter

It was shortly after 5 am. A pale rim of gold emerged above the mountain ridge. Beyond, the valley stretched out. I was standing at the window on the 18th floor of the “black pyramid” in Las Vegas. We had arrived in Sin City the day before and gotten a room at Luxor Hotel for only $30. Our rental car was parked way below. I tried to peer down to the parking lot, but could only make out hundreds of reverberating windshields.

I turned over to look at Mei. She was still asleep. Her hand was resting on my pillow. I wondered what was going on behind her closed lids. Whether she too, wanted – no, needed – to inhale the scent of sun-baked rocks. We were both longing to be on the road again, to break free, to get rid of the restlessness that was eating at our core. As soon as she would open her eyes, we would set out to the Valley of Fire in the Mojave Desert.

Little did I know what decisive moment I would be living only a couple of hours later. It was still early when we entered the state park. The air was already hot. After a few kilometers, we saw the first red sandstone domes. Mei made a full stop. We left the car, mesmerized by the steep blood-red rock shapes surrounding us.

Although excited at the hiking adventures ahead of us, we did not want to hurry. We lay down onto the street, took pictures of the road that stretched and curved like a ribbon. I wanted to capture the profundity of a road that is eternally unfolding, like life itself. But the desert has its very own savageness. In close-up, every single sand grain is crystal clear, but beyond reach, the horizon is forever hazy, shimmering and vague.

As we moved on, we saw sculptures everywhere, posing lasciviously in fiery cactus land. We entered a maze of crimson spires, playing hide and seek. Above us, a metallic blue sky was promising an upcoming heat wave.

Mei shot me a joyful look. None of us could have imagined what was about to happen.

Our first point of interest was the beehives and the petrified logs – fossils that have been charring for hundreds of years. Mei then spotted the Mouse Trail, which is famous for its prehistoric petroglyphs, and was once the hideout of a Southern Paiute Indian renegade called “Little Mouse”, who in the 1890’s was accused of gunning down two prospectors.

The hike in itself was easy enough, but the atmosphere was becoming increasingly sultry. So we sat down under a ruby arch, and Mei handed me a flask of water.

I shot her the look, the one that only she gets to see.

We kissed. Then I broke free and started climbing a twisted stone formation when a dusty green lizard ran into my foot. It was the first animal we spotted since we arrived. I tried to capture it with my camera, but it managed to squeeze into a crevice and disappear. The crevice shone like a grey vein, and I could almost sense its pulse.

It was at that exact moment that I heard them.

A couple was yelling from above. We had seen them an hour ago, touring through the valley in a vermilion convertible. The man reminded me of David Hasselhoff. The woman was dressed like Audrey Hepburn, wearing a scarf and huge sunglasses.

I looked at Mei. She was thinking the same thing. It’s very rare to find these sandstone cisterns in the desert.

We started mounting the mesa, reaching for the peak, where the couple was egging us on to continue. I clearly remember my inner instinct screaming, telling me to be careful: why would they care, whether we make it up to the summit or not? Why were they so eager to get us up there? I mean, what was their intention?

My mind was already sending me pictures of our bruised bodies lying at the bottom of a pit. But why? Why would I be so distrustful? Was it because of our metropolitan lifestyle in Paris, where anonymity and individuality had nurtured a constant apprehension? Or was it the effect of the desert, the isolation and emptiness of it all? Is it true that when we are faced with a hostile environment, we tend to consider other human beings as possible dangers?

When we finally reached the top, the man clapped his hands.

The woman was beaming. For a moment I wondered whether I was lost in one of David Lynch’s movies. The man pointed at the precipice on the other side.

Mei made a step back. I knew that she was suspicious too. If we died here, who would find our bodies? Who would think of looking for us at this altitude?

I followed the man to the cliff, but kept a short distance. I was actually preparing my body to react appropriately if needed. Every move of self-defense I ever learned was coming back to me now. I remember that I was amazed that adrenalin could do that: to conjure up whatever information we might need to overcome the danger.

He looked at me, expectantly. I knew that I had to make up my mind. I was going to trust this stranger, or not. And then I took a decision… I took a leap of faith. I leaned over, turning my back to the man. If he wanted to push me off the cliff, he could have done it. But he did not. Or else I wouldn’t be able to write these lines.

And I did see Mouse’s Tank. It was scorching hot, and yet, here we found the most precious thing on earth: potable water.

He gave off a shrug.

–       Don’t mention it! I just thought it would be cool to share this with you girls

And it definitively was. But he actually offered me a bigger gift than he intended. He helped me trusting my guts, AND putting away mistrust when it is not welcome.

Clearly, the desert is a dangerous place and you might meet misfits or deranged minds. You need to be alert. But sometimes you also need to cut the crap, and decide whether you should trust a stranger or not.

We climbed down the canyon in silence. The afternoon shadows were widening, slowly slithering out of crevices. The air was increasingly muggy. When we reached the Rainbow Vista, which is a vast area of multicolored rocks, a series of thunderbolts was tearing up the sky dome. We pressed on to the fire canyon, admiring the ever-changing colors of the scenery. Glad to be alive. Glad to be free. Glad to be us, together. 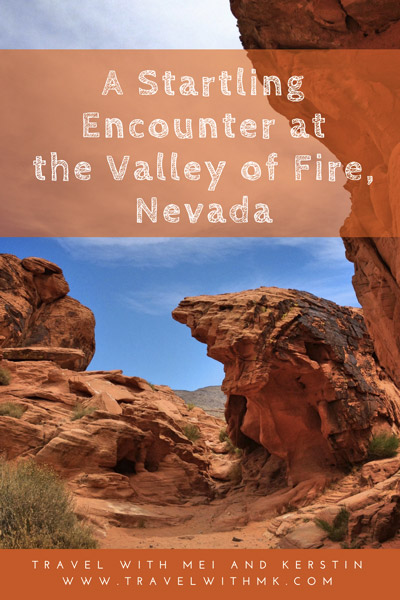