The Orval Abbey in Belgium

Peace and Quiet amidst Medieval Ruins

It’s very typical in Belgium: the road splits in two and there’s no sign where each path leads to. Kerstin slowed down her car. Which way? she asked. The one on the left would take us back to where we came from. The right road was closed. Both directions will bring us to our destination, I answered. It’s up to you if you want to see if the road is really closed for work or not… She gave me a perplexed look. Hard to choose, she stated, since I have no idea where we’re heading to.

And she was right. Once again I had kidnapped my wife for a last-minute weekend getaway. I like to do this from time to time. Last year, I planned a surprise trip to Bergamo, Italy. I managed to keep the destination secret until we arrived at the airport, where I reluctantly handed her a boarding pass. But to make a surprise last longer, road trips are actually easier. After a real success in Burgundy, I now decided to surprise my wife with a road trip through the Gaume Region in southern Belgium.

Kerstin cogitated a few seconds and then decided to turn right. The blocked road. Of course. Let’s see how far we can get until it’s closed for real…, she smirked. The road through the forest was in a rather good condition. The radio was playing Elvis’ Hound Dog. So, I turned up the volume and Kerstin sped up… The music, the blue sky, the sensation of freedom… we were on the road and felt connected.

Until… all of a sudden we spotted a man holding a shotgun! And a few meters further away on the road another man with a shotgun. And yet another one! What the hell?? Kerstin slowed down. They all gaped at us, and looked as surprised as we were, or perhaps even more. Oh my gosh! Kerstin exclaimed… They’re hunters! We’re in a hunting area! A stray bullet and we’re dead! I suddenly realized that Kerstin almost halted her car. So, I yelled: No! Do NOT slow down! Go! Faster! Let’s get out of this area, as fast as you can! So Kerstin sped up, and raced down the road until we finally approached a village.

Seriously, these Belgians are crazy! How can they NOT put up a sign to inform people that you are about to enter a hunting area? I suppose they don’t have a sign for that, I laughed. Maybe that’s why they simply put up a “closed road” sign? We should definitely offer them a few, since Luxembourg has plenty of these “hunting area” signs! We both giggled devilishly, but swore to never again take a closed road in Belgium!

Shortly afterwards, we finally arrived at our destination: Orval. That name sounds familiar, Kerstin said. After the last right turn, I saw my wife’s eyes marveling. Behind a tall stonewall lurked a building with a turret, ogive windows and heavy wooden doors. Wow, what is that? Obviously Kerstin couldn’t hide her surprised look.

That’s the Orval Abbey, I smiled satisfyingly. Set amidst a forest, this medieval monastery holds its own cheese factory and brewery. Oh yes, of course! Now I know where I’ve heard this name: the Trappist Beer Orval! Kerstin looked happy. And I love seeing my wife happy.

As soon as we walked into the first courtyard of the Cistercian monastery, we both let out a “Wow!”. At that exact moment, two white doves took off spreading their sunlit wings. A magical moment, even for agnostics like us…

A sweet odor lingered in the abbey’s gift shop where we also bought our entrance tickets. Was it the smell of honey, eucalyptus or maybe the perfume of rose flower? We both couldn’t wait to scrutinize the homemade products they sell, may it be cheese, beer, eucalyptus oil or national throat lozenges. But we kept that for later.

Behind the entrance, we stopped at a tower through which we spotted a tall basilica with a tower and a cloister, set around a manicured green lawn and a central artificial lake. The buildings looked quite modern. Probably 1930s. And for a moment I was afraid that the medieval monastery had been completely reconstructed, and that our visit would be a bit disappointing.

Relax, Mei! Kerstin knows exactly how anxious I can get when I see old monuments being torn down to make space for more modern buildings… A few meters further, however, we arrived at a largely open courtyard in front of which a string of ruins stretched. Now this looks more ancient to me!, I concluded, relieved.

We slowly walked past the heavily damaged monumental arched portal, and my jaw dropped as we moved down the aisle towards the medieval ruins of the Notre-Dame Church. Naked, these pillars, arches and columns were all victims of centuries-old destructions. Even naked, like scattered ribs, they still pointed proudly towards the cerulean sky. Above the medieval ruins, buzzards were circling and insects were buzzing by. There was no other sound than the birds’ warbles. I walked slowly; as if my steps could wake up a lost soul.

And a soul was indeed resting right in front of me. I approached the tomb standing in the middle of the ruined choir. “Here lies Wenceslas, the son of John the Blind, and First Duke of Luxembourg from 1354 to 1383”. Of course! We might be in Belgium, but we’re still in a region, which once belonged to Luxembourg.

Next to the ruined church, we found a cloister bathed in sunlight. On the northeast side, three bays led us into a vaulted chapter room. In the western monastic life, the daily meeting in the Chapter Room, where a chapter of the Rule of Saint Benedict was read by the abbot every morning, was essential for the monastic community’s life.

When we left the cloister, we saw an elderly couple strolling on the grounds of the “modern” monastery, designed by the Antwerp architect Henry Vaes in the 1920s and 30s. How can we reach the new church, I asked them. Oh, I can pull you up if you want to! Standing about 2 meters above us, the elderly man stretched out his hand to me. His wife started to giggle, and explained that we can take the stairs at the entrance of the monastery. So we kindly thanked them, and headed back to the entrance.

Oh, but access to the new monastery is restricted to those who want to spend time at the abbey to retreat and recollect, as well as to people who want to attend the daily mass. So, would you like to attend mass in half an hour? Something in the lady’s voice told us that she assumed we didn’t want to go to mass. Was it because I’m Asian? But there are Asian Catholics… Was it because we looked like an obvious lesbian couple? But there are Christian lesbians…

I looked at Kerstin. Should we lie and attend mass just to see the new monastery? We must have hesitated a second too long, because the lady had turned around to talk to someone else. We finally decided to kindly decline the offer to attend mass. One day, the new monastery will certainly be open to agnostic visitors too. And on that day, we will attend!

Created in 1931, the monastery’s brewery is not open to public visitors. But thanks to a small exhibition located next to the entrance of the ruined monastery, we were able to learn about the brewing process step by step. For someone like me, who doesn’t drink alcohol at all, I was surprised to learn that Orval beer actually contains lots of sugar, added during boiling to facilitate to work of the yeasts, but also when the beer is being bottled to trigger secondary fermentation!

Back at the gift shop, we noticed that Orval Beer is more expensive than many other Belgian beers. But if we consider that it takes six to eight weeks to make Orval Beer, and that it is brewed nowhere else in the world but in the monastery, it’s pretty normal that the price is a little bit higher. We ended up buying a case, along with 2 kilograms of Orval cheese, made on the premises of the abbey since 1928.

It was shortly before noon when we left Orval Monastery… right on time to escape the arriving crowds. Will they also find peace and quiet amidst the medieval ruins?, we wondered. 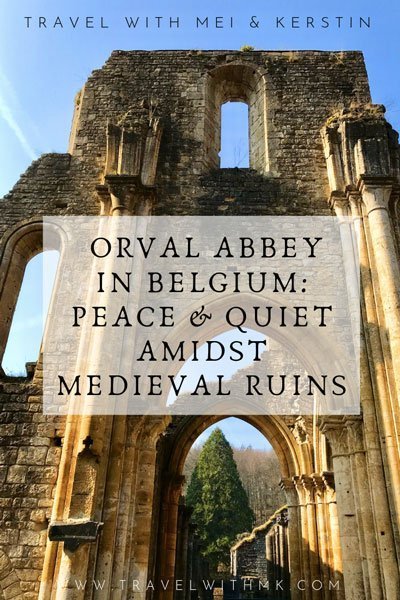 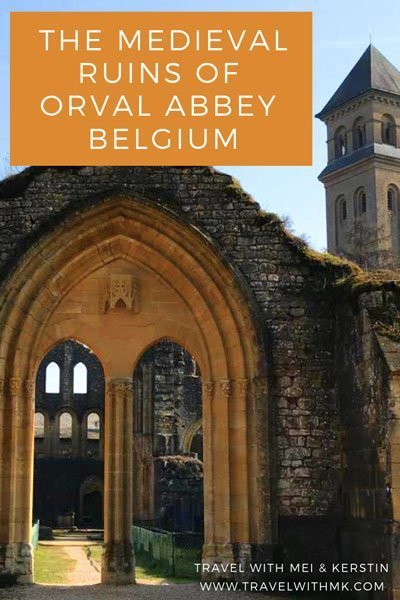 Mei parks our crimson crossover. Now what? I ask. Now we get... Read More