Time-Traveling back to Paradise

A fountain with running water is at its center, and there are old, solemn trees. At both sides stand rows of solid stone houses and in the background is the front of the main church with a large Romanesque porch, called “The Paradise”, of incomparable gracefulness and enchanting beauty. – Hermann Hesse, Beneath the Wheel

Mei parks our crimson crossover. Now what? I ask. Now we get out of the car. She says it with a smile. Clearly, she knows what’s waiting for us on the other side of the parapet walls topped with ruby tiles. Once again, my wife has kidnapped me for a surprise road trip. And all I know is that we are in a secluded town, somewhere between Heidelberg and Stuttgart.

My heart starts pounding when we arrive at an impressive late Romanesque gateway. A gateway, which leads us into another world, and swoops us back in time.

Taken by surprise, we proceed slow-paced, as if our movements could disrupt the time travel. Look, there’s a witch house. Mei whispers, obviously as astounded as I am. On my left, I spot a little green chubby figure squirming under the weight of a cantaloupe corner wall. He’s staring at a point behind my shoulder. I turn around and see a bookshop. On its closed door, I read: Maulbronn Monastery.

Something stirs in my memory. Something dating back to decades ago. Something about Kepler or Hesse. Weren’t they attending a seminary in a place called Maulbronn?

Mei walks past me, towards the Klosterhof surrounded by half-timbered houses. We stroll over the square, marveling at the sunlit medieval houses, many of which are in stone, such as the smithy, the mill and the granary. With its restaurants, city hall and local police station, Maulbronn Monastery forms a town inside a town.

I have always been drawn by mise en abyme, may it be pictorial or textual ones: stories inside stories stimulate my imagination. Now standing here, in the middle of a deserted medieval miniature town, inside its larger modern sister town, I feel like being part of a story. Of something surreal, as if we were characters that a writer is trying to insert into one of his multi-layered stories. The illusion is complete. So complete that I’m taken away by my fantasy. Mei is already at the monastery’s entrance and waves at me to join her.

The monastery itself was founded in 1147 by 12 monks of the Cistercian order, who traveled from Alsace to Maulbronn. The Cistercians were known for leading strict lives, based on pax and ora et labora. They consumed mostly raw vegetables and hard rye bread. They slept on straw mattresses, covered only in coarse woolen robes, which they also wore by day.

Since the Maulbronn Monastery was built over a period of a few hundred years, it exhibits features of various architecture styles. The round arches in the entrance area of the church, as well as the triple-naved basilica showcase the monastery’s Romanesque beginnings, while the lancet arches and vaults that dominate the cloisters are Gothic and typical of the High Middle Ages.

From the outside, the monastery church doesn’t look very impressive. But as soon as we step into the entrance hall, I’m caught short by the double-leaf main portal with its elaborate wrought iron armatures. Made from pine, this portal dates back to 1178, making it one of the oldest datable doors in Germany. It is crowned by an archivolt that was once painted. Looking up at the cross-ribbed vaults of the porch, I notice more remnants of red color, as well as black, brownish and even turquoise decorative floral paintings. Since there’s no record of the name of this masterpiece’s architect, this unique entrance hall is known as The Paradise.

We suddenly hear the clattering of dozens of suitcases being pulled over the square. A group of teenagers is crossing the open space, seemingly familiar with its surroundings. Not tourists, we presume. The chatter and clatter thickens until one by one, they disappear in one of the refectories. We follow them to the building, where a sign informs us that this is a boarding school.

And then it all comes back to me. Hermann Hesse, who wanted to become a poet, was sent off to this secluded school to study theology, although he had no intention of becoming a cleric. Though, he made good use of his time spent in Maulbronn, since it sets the tone and location of his novel Unterm Rad (Beneath the Wheel or The Prodigy), as well as the poem Im Maulbronner Kreuzgang (In the Maulbronn Cloisters).

On the exterior wall of The Paradise, numerous graffiti are soaking up the sun. Most of them are carved autographs dating back to the 18th or 19th century. I place my hand on the stone, and turn to Mei. You are touching History itself, she says. You are touching layers and layers of the past… in “Paradise”. 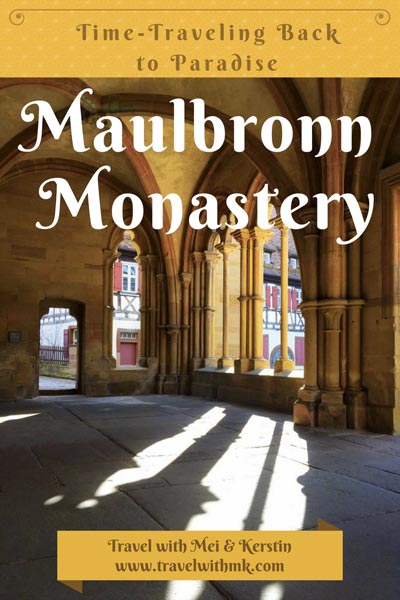 Lakes. Because I wanted to see lakes… I needed to see... Read More