What you should NOT do 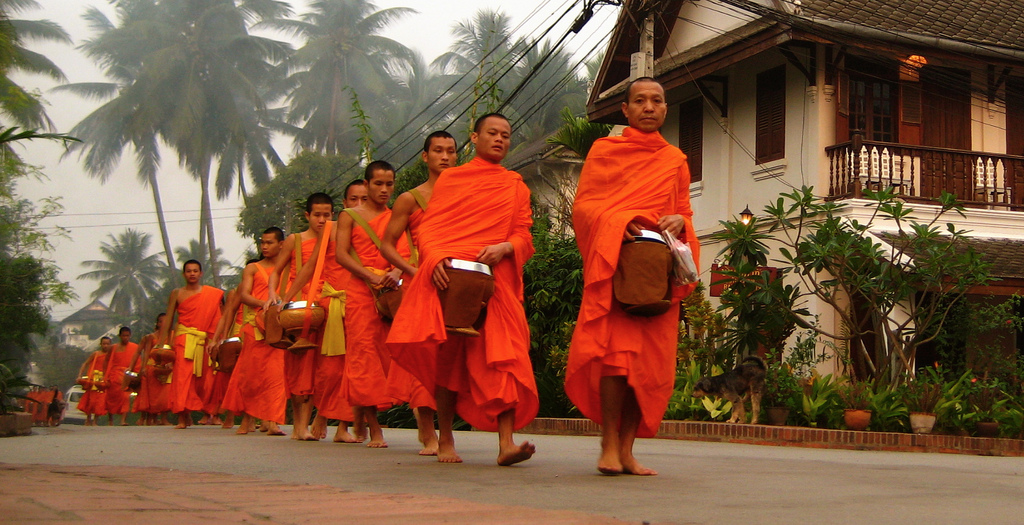 4am. The daily gong from Mount Phou Si first woke up the stray dogs. And soon, their howling stirred the roosters. 5 minutes later, they all quieted down, but the wooden floor above us began to crackle. The owner of the guesthouse Villa Chitdara was getting out of bed, like everyone else in Luang Prabang.

She didn’t look surprised to see us at the entrance hall shortly before 5am. Clearly, we were not the only travellers who knew about Tak Bat, the daily alms giving ceremony in Luang Prabang.

The procession is quite lengthy, she said. Would you like to have a cup of coffee first? Do you usually eat something before the ceremony, we asked. She shook her head: first the monks, then us. Then we should do the same, we replied.

The first of the saffron-clad monks in the single-filed procession were the oldest ones. Each of them carried a large lidded bowl, which was held by a trap hanging from their shoulder. As they walked by us, they opened the lid and each of us put a handful of sticky rice in their bowl. Some locals added bananas and cookies.

The Lao monks all walked barefoot and in meditation. No almsgiver spoke, and neither did the monks. Never had we seen so many people walking in silence at the crack of dawn. Besides the birds’ chirping, the only noise we heard was that of the opening and closing lids of their bowls. And somewhere, a couple of roosters kept crowing.

When my bowl of rice was empty, I bowed to the monks, stood up quietly and slowly withdrew to the guesthouse’s forecourt. Hidden behind the entrance gate, I filmed this morning ritual from afar. In the meanwhile, we were going towards the end of the Tak Bat, since the monks filing by were now teenagers or even younger.

Standing there and watching the Buddhist monks collecting food from locals, I wondered if they were really going to eat the donated food… Only some food is kept for their diet, we were told after the ceremony. Most of the sticky rice is likely to be used to feed their domestic animals.

When our breakfast was served in the garden, the owner of the guesthouse sat down with us. She explained that the Tak Bat is a ritual that’s been going on in Luang Prabang for hundreds of years.

Legend has it that a little girl used to bring food to her deceased parents, whose tombs were embedded on the other side of the Mekong river. But one day the Mekong flooded, and the stream was too strong for the little girl to cross the river. She sat down and started crying. Soon a monk walked by and saw her weeping. He stopped to asked why she was so sad. When the girl had finishing exposing her problem, the monk offered to cross the river in her place and to make sure the food would be deposited on her parents’ tombs. Thankful, the girl accepted. And from that day on, monks in Luang Prabang collect food from the community, in order to offer the donations to their ancestry.

Of course, nowadays, the Lao monks don’t physically bring the collected food to the cemeteries anymore. Once all the offerings have been collected, they return to their temple, and present the alms to Buddha while praying. Buddha will then distribute the donations to all the locals’ ancestors, wherever their tombs might be.

When I was a kid – she continued – there used to be many more monks in the daily procession. The number of monks you saw this morning was only half, maybe even less, than 10, 20, or 30 years ago. In a couple of years, the monks will probably stop this ritual.

But why? She hesitated a bit, before saying: because of the tourists. I looked at Kerstin, who also seemed surprised. Quickly, the Lao lady added: No, I mean… some tourists. The problem is that there are more and more tourists in Luang Prabang. Of course, that’s good business for us, who have a guesthouse, a hotel or a restaurant. But many tourists come here because they want to see the Tak Bat. And they don’t just look, they take many photographs, they use flash, they talk loudly or laugh when the monks walk by. Some even want to take selfies with the monks…

But we – especially women – never touch the monks. We never make eye contact with them neither, and we always keep our head lower than theirs, that is why we kneel. It’s a sign of respect. Some tourists don’t understand. Or maybe they don’t care. Sometimes they buy alcohol at the night market, and the next day we find broken bottles on the streets. That is very dangerous for the monks, who walk barefoot.

We both felt bad and ashamed. Ashamed for all the tourists and travellers, who are not capable of showing respect. Don’t be sorry, she smiled. You can help us change this: when you return to your country, tell your family and friends what they should NOT do when they come to Luang Prabang.

As the owner of our guesthouse slowly walked away, I suddenly had to think about the slogan of the Quicksilver green campaign:

Don’t destroy what you came to enjoy. 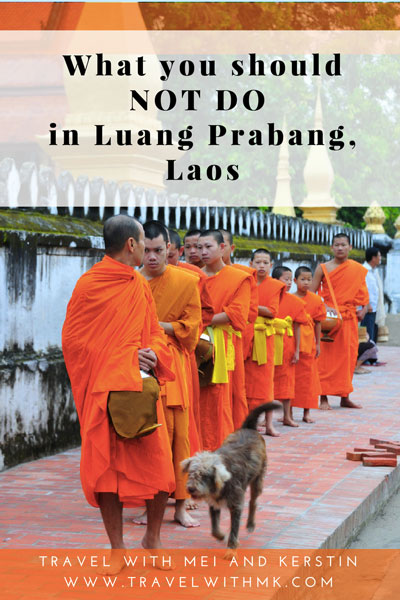 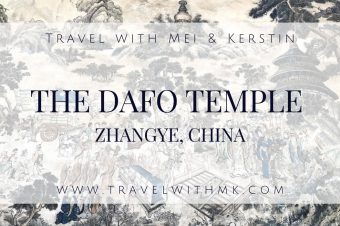 As our train curled west towards Zhangye, we watched jet-black yaks... Read More 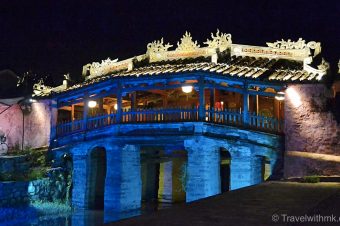