From Guilin to Yangshuo

It was pouring as if the world was about to end. We had to cover half a mile to reach the Guilin pier to board a boat to Yangshuo. The whole place was flooded. With dripping pants and soaked shoes we jumped on deck of a modest cruiser, where a woman greeted us with a plastic bag. Her unsmiling face further wrinkled as it took us half a second to understand that we had to put our umbrellas in the exhibited plastic bag.

Outside, a heavy curtain of rain was obstructing all possible sighting of the famous karst mountains. For now, the only spectacle was the river Li starting to overflow its banks.

The unsmiling lady came by to pour some lukewarm Chrysanthemum tea. After a first sip, our guide Ling offered us her Buddha tea that she carried around every day in her vacuum flask. What Ling called Buddha Tea, as we had learned a few days before, is literally a mix of Monk fruit or Buddha fruit (Luo Han Guo in mandarin) and ginger. Since Luo Han Guo is a natural sweetener, the whole secret of its brewing lies in the right combination. Ling is an expert in this: she uses Buddha tea as a Yin tonic, and takes a sip every half an hour. According to traditional Chinese medical literature, Buddha tea helps to relieve cough and acute bronchitis.

Just as we were conversing about the virtue of this tea, the same unsmiling lady showed up again and condescendingly ushered Ling to another seat, a row away from us. We protested, but the rude woman had already turned her back. Now a group of British seniors was boarding the tour boat. The cruiser was soon filled with chat and spattering coats. It turned out that their guide was willing to exchange seats with Ling, who then returned to us with a smile.

The motor growled, and soon we drifted away from the docks. The brownish water was rising high-speed, and the curtain of rain was as impenetrable as before. What was supposed to be the highlight of our trip promised to be a total disaster.

But just as we had given up on the idea of admiring poetry-inspiring landscape, the rain suddenly stopped. Mist was slowly rising above the water. A small island appeared, with a single water buffalo grazing. Not far away, a troop of white ducks was following the riverbanks. And soon we could see the first karst mountain emerging out of the fog. Its head was made of rock, but the body was steeped in green. We were gaping at this mysteriously changing scenery, disclosed bits by bits, like a poem’s strophe releasing its stanzas. Gradually, one meaning at a time. 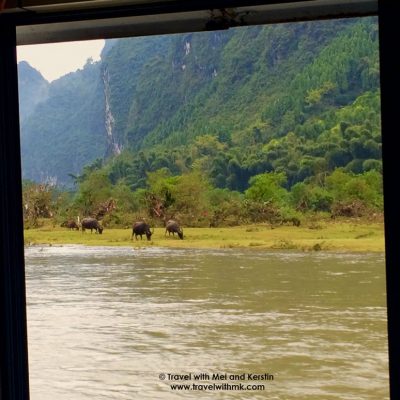 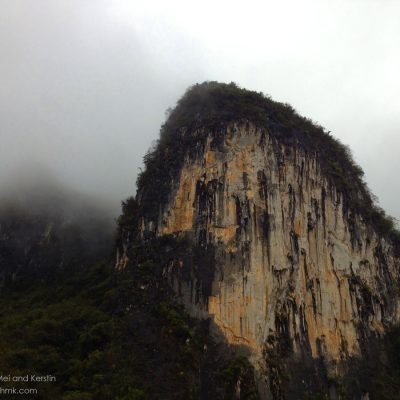 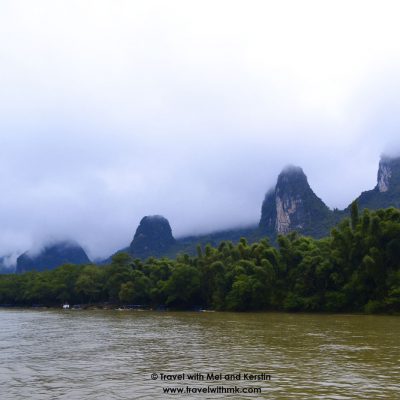 We climbed up onto the observation dock, to get a better look. The air was fresh and clear. We soaked it all in. Next to us, flat-bottomed fishing vessels were lazily floating by. The fishermen did not look at us. They seemed to be dreaming too.

Behind them, strange pinnacles of rock were playing hide and seek. We tried to capture them on camera, but they were too clever for that. It was simply not possible to catch the reserved mountains. They had been here forever. What did we – insignificant drifters – mean to them, anyway? We could consider ourselves lucky that they even showed up.

We continued to admire the limestone peaks dressed in their emerald gowns, before going back to the dining room, where the unsmiling lady had set up a Chinese buffet. A queue had already formed, and the Brits were chatting about Cameron, the Queen and Harrods. Clearly their mind was somewhere else. But maybe this was the alleged power of the dragon mountains: to show you in your mind what your heart truly desires.

A fit sixty-something lady was unhappy about the two flies sitting on the dessert. She looked at the food suspiciously, and glanced at me, looking for support in her disgust. I reached out and took a double serving of the incriminated food. Her friend in front of her chuckled, and I cracked a smile.

Ling waited until everyone was eating, before helping herself to some food. We hoped that she would not sit somewhere else to eat, as most guides in Asia do. But before we could ask her to stay, she vanished with her plate, and we did not see her again until we arrived in Yangshuo.

From our seats, we could still admire waterfalls, stone bridges, and tiny rice fields. More karst mountains were now looming, coming out of their shadows, like timorous actors. But their heads were still in the clouds. What could they be dreaming of, we wondered. 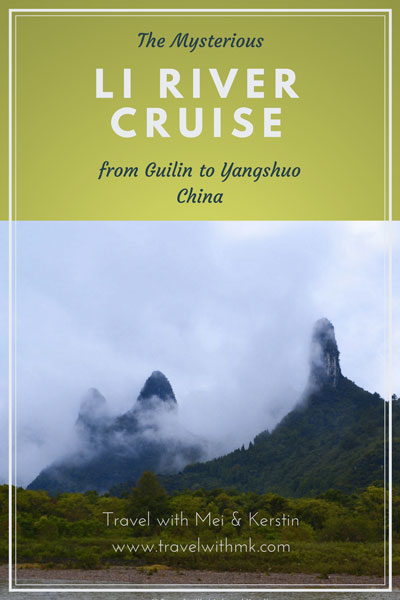 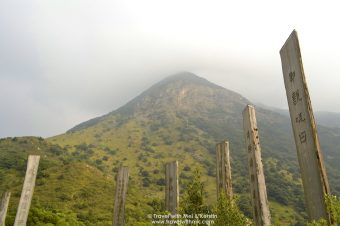