The Imperial City of Hue, Vietnam 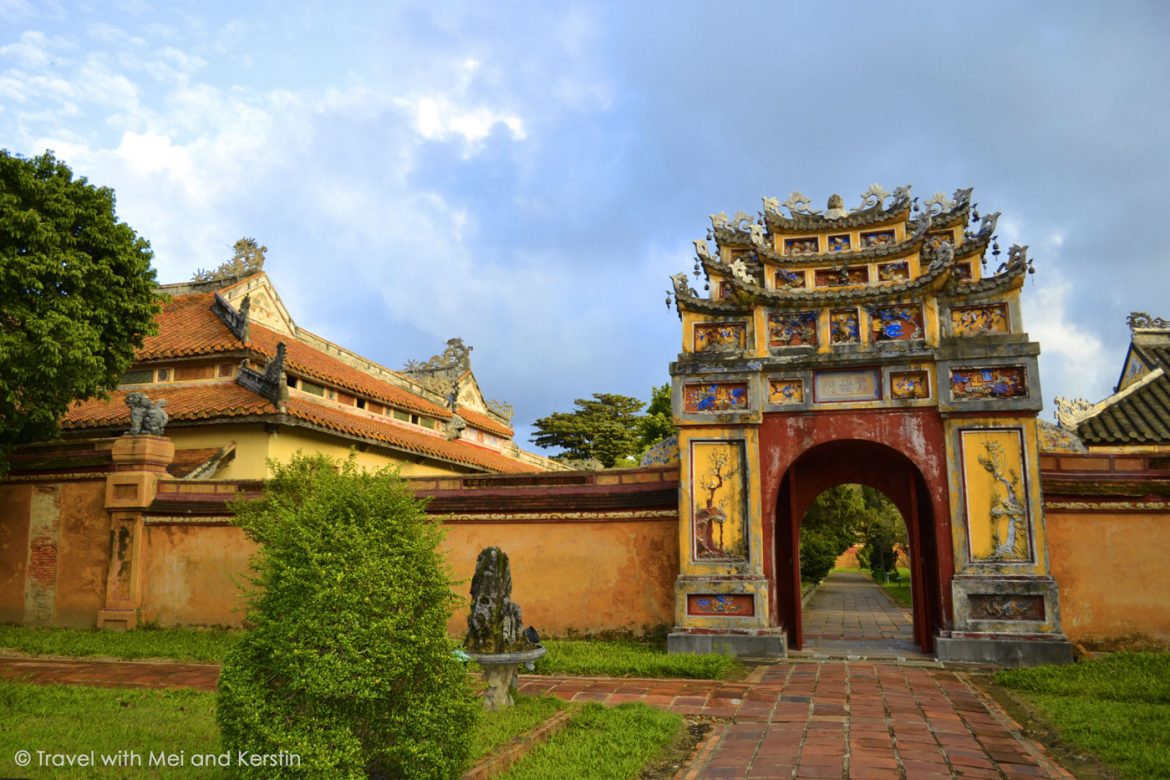 When I was a little girl, I used to watch Chinese TV shows telling stories about the Tang or the Ming dynasty. About warrior families, emperors, princesses, and palace intrigues. What really impressed me were not the storylines (it always ends the same way…), but the Ancient Chinese architecture.

I loved the gabled roofs, the wooden red sliding doors, and the circular portals separating beautiful courtyards. There were also the guarding lion and dragon sculptures at the entrances. Sometimes I imagined living there in a previous life, playing hide and seek in the gardens. 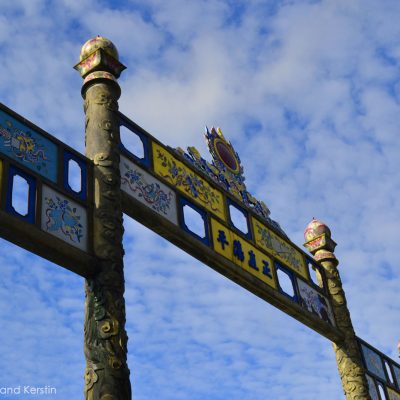 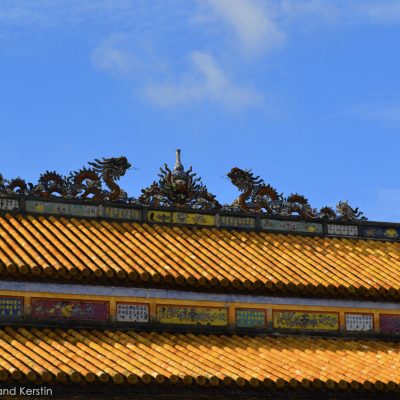 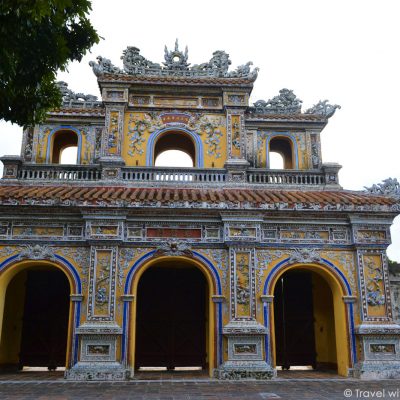 I always thought that we would have to travel to China to see all that architecture. But when we arrived in Hanoi, parts of my wish came true as we wandered around the Temple of Literature and the Ngoc Son Temple. And by the time we arrived in Hue, I thought I was in heaven!

Located on the bank of Song Huong (Perfume River), Hue is 700 km south of Hanoi, and 1100 km north of Saigon. It is in fact right in the center of Vietnam. During the last royal Vietnamese dynasty, Hue was the Imperial capital of the Nguyen Dynasty. And until 1945, this city was both the national capital, and the cultural and religious center of Vietnam. 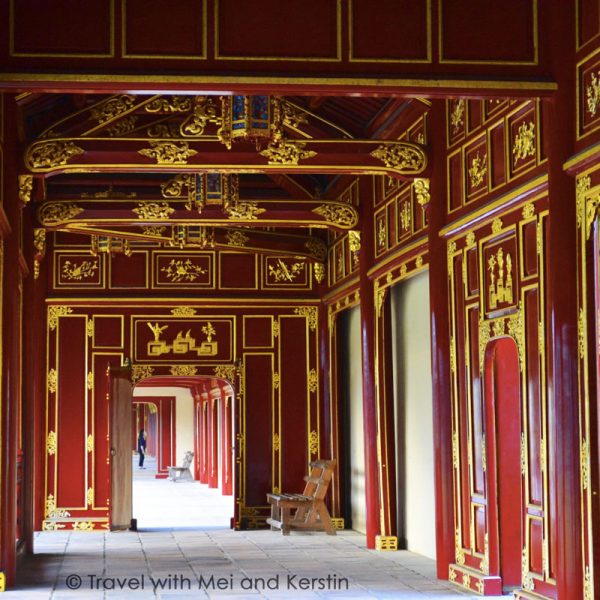 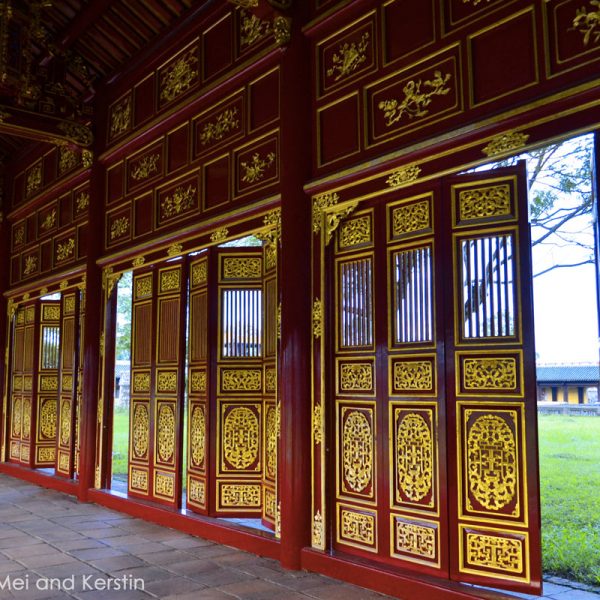 Gigantic complexes of imperial tombs and pagodas are scattered all along the Perfume River. The highlight of Hue is however the Imperial City, surrounded by a Citadel which consists of a 2 km x 2 km wall and a huge moat. The inside of the Imperial City is divided into several zones: the Worshipping Zone, the Great Ceremony Zone, the workshop zone, the residence of the emperor’s mother and grandmother, and many more.

At the heart of the Imperial City lies the famous Forbidden Purple City, surrounded by brick walls. Like the (other) Forbidden City in China, only the Imperial family, concubines, eunuchs, and the emperors’ associates were allowed to access the Purple City.

The Imperial City of Hue is perhaps the best place in Vietnam to see how the originally Chinese imperial architecture got adapted by Vietnamese civilization. After all, this royal city is an emulation of the Chinese Forbidden City: it was built after the one in Beijing, according to Emperor Gia Long’s wish.

During the Vietnam War (or shall we rather call it the American War?), Hue suffered a lot of damage due to its location near the border dividing Vietnam into North and South. Today, declared as a World Heritage Site by UNESCO, many historical monuments are still being restored.

I’m not an expert of Chinese or Vietnamese architecture. So I must admit that I have no idea if the buildings have been accurately restored or not. But as we wandered around the ruins and the restored buildings, time seemed to slow down. We felt propelled back into the 19th century. And out of the corner of my eye, I thought I caught a glimpse of a eunuch behind a pavilion… Or was I just dreaming?

If you’ve made it to Hue, you might also want to spend a day in Hoi An, or travel up north to explore the capital of Hanoi, the infamous Halong Bay and the beautiful Vietnamese countryside in Ninh Binh! 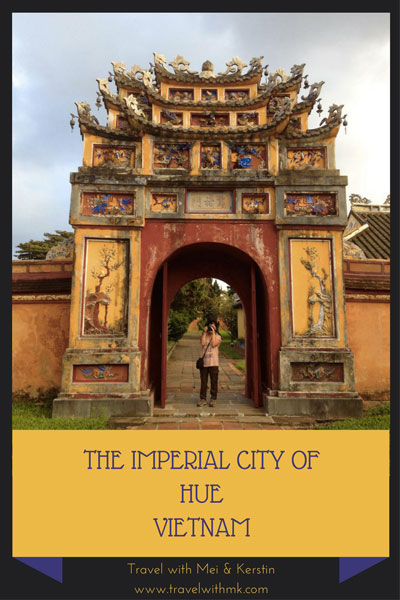