24 Hours in Hoi An, Central Vietnam

Or how we chose to slow travel...

24 hours to visit a city is a bit thin. And the little town of Hoi An, located about 100 km south from Vietnam’s former imperial capital Hue, certainly has a lot to offer.

But there are many ways to travel: you either rush to squeeze the absolute maximum out of your stay, or you take your time to explore and capture the spirit of a city. Pausing whenever you feel like it, missing out on some landmarks, while experiencing other things.

In Hoi An, we chose the latter, because if there’s a place on Earth for slow travel, it would be the ancient town of Hoi An.

9 am: Tell me your style and I’ll wave my magic wand

As we stepped into the streets of Hoi An, a lady came to ask us if we wanted to shop some custom tailored suits. She invited us in her shop, and offered us a cup of tea, along with a couple of brochures. We would just have to choose a style, a color and a material. Apparently, she can also clone clothes that you bring in. And some garments, especially casual out-going dresses, can be made within a day.

On the same street, both winter coats and summer dresses were on the display rack at the store front of a dozen tailor shops. Come, Madame! Let me take your measures now, and you’ll have your garment before sunset! We kindly declined their offer, and headed towards the heart of Hoi An.

10 am: Crossing the Japanese Bridge

Hoi An used to be a flourishing trading port between the 16th and 19th century. By the end of the 17th century, the town was filled with Brits, Portuguese, Dutch, Indians and French.

But the two main communities were Chinese and Japanese. Their presence in Hoi An is still tangible nowadays: just look out for ebony wooden two-story houses, ancient temples and assembly halls. Or… the famous Japanese Bridge (Chùa cầu).

Built in the early 17th century, this covered bridge made a bond between the Chinese and Japanese communities in Hoi An. As we lit three incenses in the little Buddhist temple inside the bridge (yes, you read that right, the temple is located inside the bridge), we couldn’t stop thinking about how strange life can turn out to be: the first Sino-Japanese war started less than 300 years after the construction of this bridge. Obviously, they could not have predicted this war when they built the bridge. We wonder whether they wished peace upon both nations when they consecrated the footbridge. A “forever peace” spell would have been appropriate…

11am: Sipping tea with the owner of a traditional Sino-Viet-Japanese house

There are three traditional houses in Hoi An that are open to visitors: Phung Hung House, Quan Thang House, and Tan Ky House. All of them are inhabited for over 300 years. Most people say that they’re pretty touristy: once you step in the house, a hostess comes running to greet you. While you have a cup of tea, she quickly explains the history of the house, then incites you to buy an over-priced handicraft souvenir, and waits for her tip.

Our visit in Tan Ky house was a bit like this. The hostess, who explained that she was one of the last family members of seven generations still living in the house (but is it true?), was in a hurry to make us leave as soon as she finished talking. We didn’t even get a chance to ask her any question.

But when we went to Phung Hung House, the atmosphere was different. After exhibiting her aunt’s embroidery, our hostess settled down with us to chat, and we ended up staying there for almost an hour.

The conversation unfolded very naturally, punctuated by sips of tea and bits of wisdom. It was a gift offered to us – delivered in nuggets of respect, dignity and tradition. We left the house transformed.

However touristy a place is, you can always find a little spark of magic if you try hard enough. If you show real interest in people and their life story, they might just open up and offer you what you could never have expected.

The scorching heat made us long for lunching in an air-conditioned restaurant. But as we walked through the covered market of Hoi An, we simply couldn’t resist tasting some of the local Vietnamese food. Of course, it was really hot inside (no A/C). And the floor was more viscous than sticky rice.

Dripping with sweat, we nevertheless decided to stay in the market for lunch. Because that’s what it takes to get the best Ban Xeo ever. Along with a glass of Sinh To Man Cao (mangosteen smoothie), I was literally in heaven!

1:30 pm: Hanging up a prayer coil in a Chinese temple

Chinese people build assembly halls wherever they settle down. Assembly halls are places where a Chinese community or congregation gathers. And they often serve as “temples” as well, where the congregation worships its gods and goddesses, and where people come to pray for their safety, offspring, wealth and happiness.

In Hoi An, the most famous assembly halls are those built by the Fukien (Phuc Kien) community and the Quang Trieu (Cantonese) community. But the one we were particularly interested in was of course the Assembly Hall of the Teo Chew Congregation, since my family and ancestors are Teo Chew people.

I’m an atheist, but since my family members are Buddha worshipers, I decided to buy a giant prayer coil to wish them good health. After paying for it, I got a yellow paper on which I had to write down my family members’ name and date of birth. It was then clipped to the coil, which was hung up on the ceiling. Hundreds of suspended incense spirals were already smoldering, and people kept lining up to have more coils pinned up. When I asked the man how long my coil will stay up there, he said a couple of months. I stared at him in disbelief. But how are they going to find more space?

As we left the Cantonese Assembly Hall, and walked down the street towards the river, we stumbled upon Cocobox, a rustic café, juice bar and farm shop. Opened in 2013, this coffee shop is decorated in a colonialist style. At first we hesitated a bit, wondering if it’s a tourist trap, but finally thought that we should give it a try.

Drinks are not cheap at this place. But it was nice to listen to the owner’s story: he’s a Brit and got wed to a beautiful Vietnamese. Together they decided to open a coffee shop in Hoi An, offering local organic products, coffee and cocoa, and of the most extensive choices of fresh juices in Central Vietnam.

4 pm: Exploring Hoi An by cyclo

Cyclos in Hoi An are a little bit more expensive than in other cities of Vietnam. But after crossing the country from north to south, we agreed that Hoi An is the best town to have a cyclo tour.

Compared to other Vietnamese cities, traffic in Hoi An is scarce, almost inexistent. In fact, the narrow streets are built for bikes, cyclos and people, so we heard no stressing motorbike nor car engines since they’re banned from the center of Hoi An.

Nestling in, I enjoyed the sing-song of the ladies selling vegetables on the sidewalk, the laughter of local children, and the well-preserved façades that display a unique blend of indigenous and foreign influences in Hoi An. Kerstin, however, seemed to shrink in her cyclo; it probably felt too colonizing and weird for her to have a Vietnamese pedaling the cyclo and driving her around.

At dusk, we strolled through town to experience Hoi An by night, and soon recognized the smell of Vietnamese barbecue. The banks of the Thu Bon river gradually came to life.

Little charcoal braziers were set up here and there, on which the locals grilled marinated meat or shrimp skewers. We stopped at a vendor at the waterfront to get several thit nuongs, and enjoyed them wrapped in rice paper, along with fresh mint, basil, cilantro and lettuce. Dipped in a delicious satay sauce with peanut, these Vietnamese rolls tasted like heaven!

As our day in Hoi An came to end, it was time for us to purchase a handicraft silk lantern. Actually not just one, but several ones. First because there are so many different shapes and colors, and we just couldn’t decide which one to buy. And second: if you hang up just one lantern at home, it won’t look good. So we preferred to buy 3 or 4 lanterns, especially since they’re light and can be carried around pretty easily.

Even if they’re all hand made, we decided not to stop at the first store. When we finally found the perfect ones, we took time to play the bargain game well, just like the locals do, making sure both parties ended up winning.

In the meantime, a dazzling sea of colorful lanterns had formed along the Thu Bon River. The city was also ablaze with light and color. The moonlight was splashing ripples of silver across the water. We walked hand in hand, as if an invisible ribbon of gold had glued them together. For a night, we belonged to Hoi An. 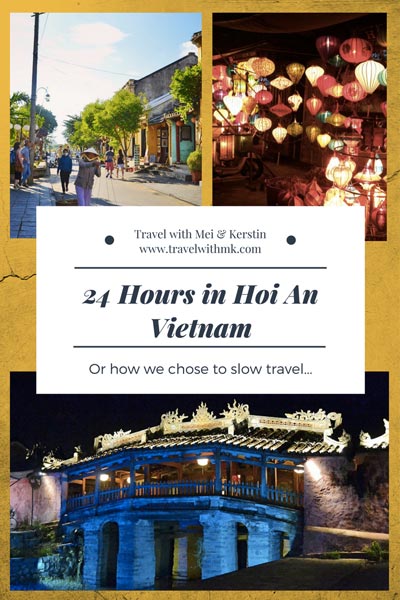