Another Unbelievable Experience in France 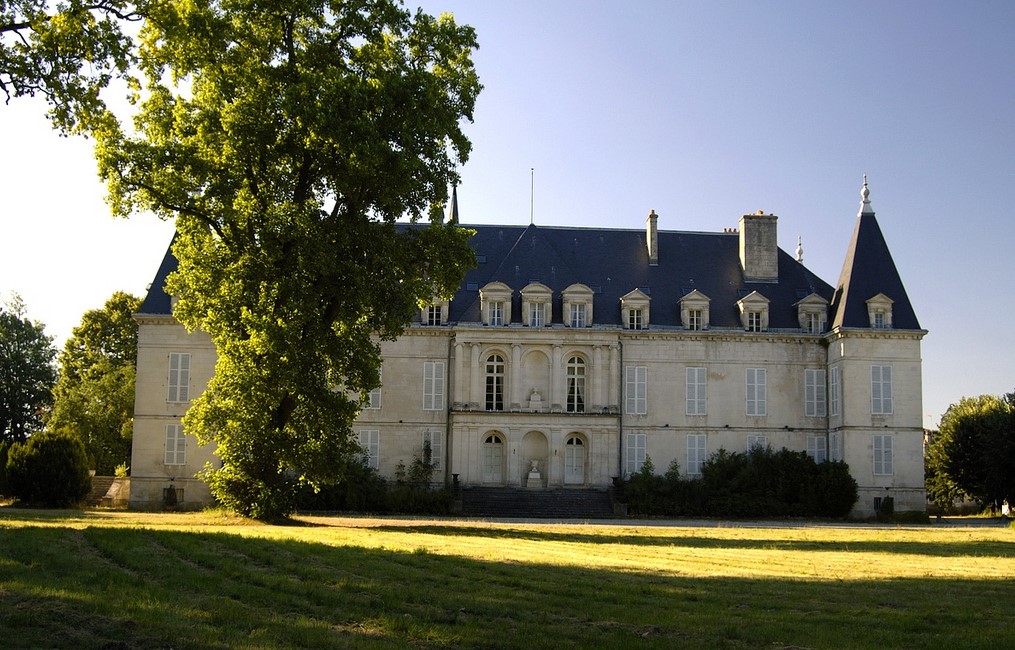 Are you sure this is the hotel you’ve just booked? Because this looks like a castle, a real Château ! Kerstin stopped the car at the entrance way, and looked at me. The wrought-iron gate was open, but we weren’t sure if we should get inside. I had typed in the address on Google Maps that was in my confirmation e-mail. Or was there another town called Arc-en-Barrois?

We both suddenly burst out laughing… I hope I didn’t make the same mistake as in San Francisco, I said. Because when all the hotels in the Bay Area were fully booked, I thought I found a studio at the American Extended Stay in Richmond next to Berkeley. Except that I called the one in Richmond, Virginia…

The entrance door in the center of the sandstone façade stood open. So, we both stepped inside, and gazed at the grand stone staircase. Next to an antique velvet sofa, we saw the familiar blue sign from Booking.com with a 9,2 score, neatly framed and resting on a carved oak sideboard. Do you see that sign? I smiled. This is definitely a hotel, or whatever you wish to call it… and the room I booked an hour ago is in here! The stuffed-out bear behind Kerstin seemed to smirk.

We climbed up the stairs carpeted in burgundy, to discover a grand piano and more antique furniture in an upper hallway. The high oak door on the right led to a sumptuous dining room with Venetian crystal chandeliers hanging from a carved wood-coffered ceiling. Behind that room, we spotted another lavishly decorated banquet hall. On the left of the main hall, a salon filled with Empire style chairs and other 19th century furniture lead to a more extravagant lounge, TV room, and even further a library and reading room.

Several ceiling-high windows were open and we could hear the chirping of the birds outside, but no one seemed to inhabit this charming château. Where’s the reception? I whispered, when I saw in Kerstin’s look that she was as mesmerized as I was.

Bonjour! Il y a quelqu’un? No answer. Hellooo-hooo? I called out again. Meow… we both turned around and saw a cat descending from the great staircase. It stopped, shot us a  question mark, with one paw in the air as if it wasn’t sure where to put it. Then it sauntered toward us. I kneeled down to pet it, and got another meow.

We finally decided to call the number that was sent to us per e-mail. Oh, I didn’t know you were already here! 2 minutes later, a man rushed down the stairs to welcome us. This place is really majestic! we exclaimed. And for a good reason!

He told us that the Château d’Arc-en-Barrois and its surrounding forest was owned by the French monarchy since the Middle Ages, but was destroyed during the French Revolution in 1789. When King Louis-Philippe restored monarchy in 1830, the château was returned to him. His sister, Princess Adelaide d’Orléans, who later owned the property, decided to reconstruct and renovate the castle that she wanted to use as a hunting lodge. Unfortunately, the king’s sister died before the restoration works finished.

The property then passed to the Orléans family until it was sold to private interests in the early 1970s. In 2001, the château was finally bought by a Dutch family, who converted it into a luxury hotel. It was entirely renovated with high quality materials, and some modern elements such as an elevator for guests, and another to carry food from the kitchen in the basement up to the 3rd floor.

After showing us the different dining halls on the ground floor, he led us to one of the castle’s 50 rooms. It’s the room of a Swedish banker, he said. We looked at him in confusion: you mean, it once belonged to a banker? No, it’s still the room of a banker now.

You see, he continued, the concept of this residence is that the property is shared by 50 owners. Each shareholder owns his own apartment or room, which is equivalent to 2% of the Château d’Arc-en-Barrois. And each owner can come to stay whenever he or she wants to throughout the year, and for as many days he or she wishes to. When a shareholder doesn’t want to stay here anymore, he can sell his apartment or room to whomever he wants, for the price he wants.

Some of the shareholders rent out their apartment or room for a certain period of the year. Your room here for example is owned by a Swedish banker, who only visits during the summer. The walls of our room were upholstered in blue and white stripes, and the bed – rather small I must admit – covered with a blue flowered duvet.

When he noticed our perplexed looks, he asked if the room was alright for us. It’s a bit small, I answered. Unfortunately, the other rooms are currently not for rent. But you can use the library, the TV room, the reading room and also sit in the banqueting halls downstairs, if you wish too. And make sure to stroll around the garden down to the river Aujon.

But after a day-long drive through the Champagne Region, we preferred to have dinner at the brasserie next door before enjoying a good night sleep. The next morning, we were woken up by a powerful dinging. The church bells were swinging right outside of our window. When the bells stopped, we heard a scratching sound on the other side of the door. Can you hear that, I asked Kerstin? A couple of seconds later, we heard a meow… Kerstin crept out of the bed and got the door. The little cat sped inside without invitation. It directly jumped on the vintage chair. Meow! Oh, good morning, I replied. It pounced on the windowsill as if hunting a mouse and blocked our view.

I guess it came to escort us down for breakfast. So, you better hurry, Kerstin said. And indeed, it led us out of our room and down the stairs to the castle’s terrace. There, a woman ushered to greet us. She served us coffee, fresh orange juice, eggs, and homemade jam. Would you also like to have some cheese, she asked? When we said yes, she requested that we follow her to the kitchen. There, we saw a large display of French cheese, and we ended up tasting a little slice of each.

Sitting on a terrace all by ourselves, we suddenly felt like royalties. Can you believe this? All this for less than 50€? By Kerstin’s smile, I knew that she was thinking the same thing: our stay at the Château d’Arc-en-Barrois was turning out to be one of the weirdest sojourns ever! Probably even more eccentric than the night we spent in the secluded medieval village of Brancion…

Disclosure: if you click on the hotel links in this post, we may receive a small compensation at NO extra cost to you. 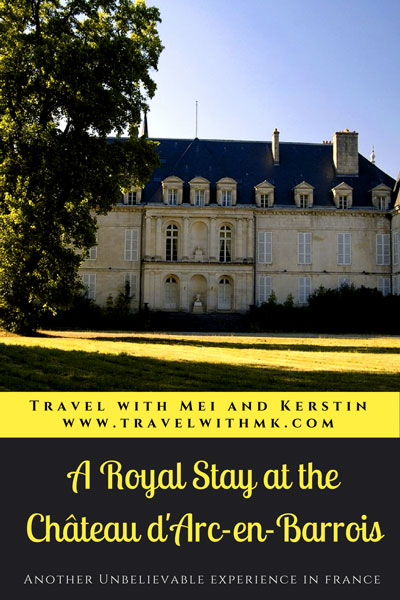