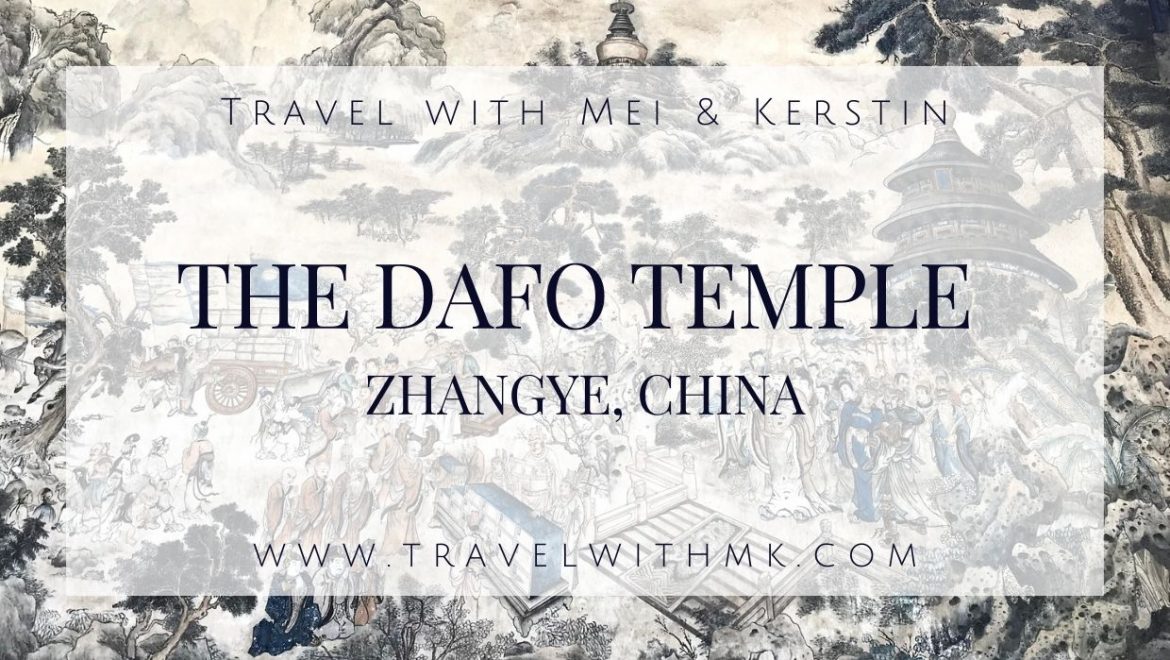 As our train curled west towards Zhangye, we watched jet-black yaks and blue-dyed sheep grazing along the Hexi Corridor.

Located between the snow-capped Qilian Mountains in the south and the inhospitable Gobi Desert in the north, the Hexi Corridor is a narrow passage of around 1000 km. All explorers and merchants who traveled between Central Asia and China had to pass though this string of arable terrains, which forms the northern part of the ancient Silk Road. The very Silk Road we explored from Xi’an to Ürümqi in the summer of 2019.

The city of Zhangye is one of the oases along the Hexi Corridor. Marco Polo, who lived there for a year, called this place Campichu. On the day after our arrival in Zhangye, we found out that there’s even a main street in the city named after Marco Polo, along with a statue of the Venetian merchant standing proudly in the center of a roundabout.

Marco Polo was however not the only famous historical figure to have lived in Zhangye. The Mongol Emperor Kublai Khan is said to have been born in this city. And to be exact, inside the Dafo Temple. Built in the 12th century, this Buddhist temple now holds the longest wooden reclining Buddha in China.

The statue of the reclining Buddha is in fact so long that I had to take a step back when we set foot in the Dafo Temple. But having been raised Buddhist, I felt the necessity to kneel down on one of the three prayer mats and say “Namo Amituofo”, before I dared looking up to give the statue a closer examination. That was when I saw that Buddha’s eyes were almost closed.

Behind me, I heard Kerstin ask our guide about the meaning of a sleeping Buddha. Oh no, he is not sleeping, Tony answered. He is dead! I turned around and saw Kerstin looking perplexed. You mean, he entered nirvana? she asked. Yes, exactly! He is dead and he went to nirvana… to heaven. Buddha is dead, that is why his 10 disciples are standing around him. Tony raised his arm and pointed at the statues positioned around the reclining Buddha.

I looked at the disciples’ face and noticed something unusual. Like the Terracotta Army we saw in Xi’an, the statues representing Buddha’s disciples also reveal different physical traits. Not just the form of their face or eyes is different, but also the color of their face. According to our guide Tony, this heterogeneity was meant to show that Buddha had followers coming from various regions of the world.

Next to statues with Chinese Han facial characteristics, we recognized disciples with Mongolian traits, Tibetan, Indian, Persian or Central Asian, and even an African. One of the disciples probably represents a hermit who preached in the desert, because he was portrayed as a very skinny man with visible ribs.

Perhaps it was due to the dim light inside the temple. Or because I kept looking up at the tall statues standing high above us. But for a moment, I thought they moved…  Or was it because of the statues’ hollow eyes? Tony said that their eyes were all made of jade, but unfortunately the stones were stolen, leaving them as round big holes, looking into the void. 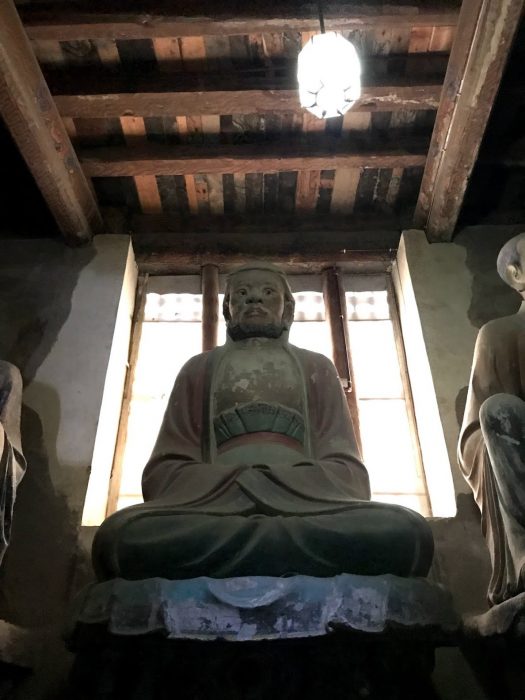 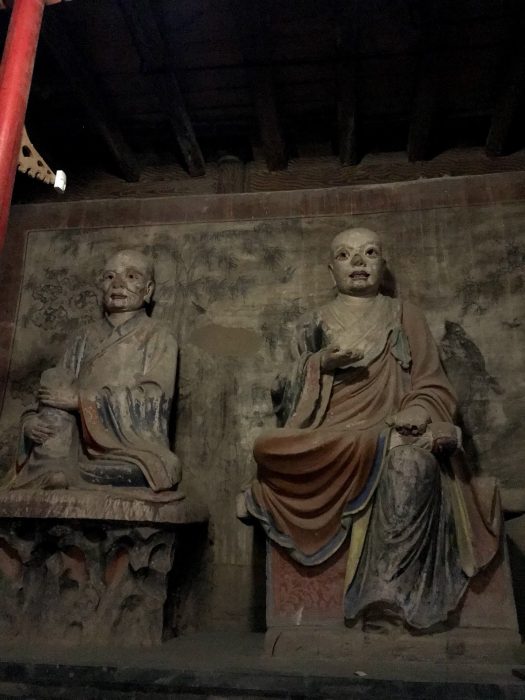 You know, there were many other items inside the reclining Buddha. I don’t know why our guide suddenly whispered, as if what he was about to tell us had to be kept secret. Look, he continued, the Buddha is very high, right? It is 7,50 meters high and 35 meters long. Inside the Buddha there are in fact five stories. Each story is about 1,50 meter high. If you went inside, you could climb from one story to the next. When the statue was built, the monks hid pottery, boxes and many other relics inside. But unfortunately, everything was stolen and destroyed during the Cultural Revolution. Tony nodded his head slowly, as his whisper came to a standstill.

So, is or was there a ladder inside the statue of Buddha, which connects the five stories? Our guide looked at me with a question mark. Oh, no. There is no ladder. Only sticks of wood. Seeing us both confused, Tony explained that the statues are not really made of wood. They are made with sticks of wood, then covered with dry mud and then painted. Zhangye is an arid area. So, the sculptures of this region are usually made of clay, not wood.

Oh, let me tell you something else… look at this disciple! Tony pointed at a specific statue standing behind Buddha. This is Buddha’s son. He looks sad, because his father died. Personally, I think that the son of Siddhartha needs to learn more. He is not supposed to be sad, because Buddha is going to heaven. If his father were like you and me, a human, then yes, he could be sad. In fact, I don’t really understand Buddhism and Taoism. Sometimes, it’s not logical…

Are you a Buddhist or Taoist? I asked Tony, sensing Kerstin’s sudden sharp stare at me. I could feel that my question to Tony was a bit too straightforward for my wife. But Tony is Chinese. And I know that Chinese people don’t interpret forthright questions as impolite or disrespectful. If they don’t want to answer, they either reply they won’t tell you, or they simply give you a loud laughter. Our guide did neither of these…

I’m interested in all types of religions and their history, Tony stated. But like 90% of Chinese people in China, I don’t believe and don’t practice any religion. In fact, if I had to choose one religion, I would probably choose Christianity or Islam. When my grandmother died a few years ago, my parents made a huge Taoist ceremony for her. A lot of relatives, friends, neighbors and everyone from the village came to her burial ceremony.

People were talking, singing, even eating and laughing. I was shocked, because I was sad. I could not understand why they all talked and laughed. My grandmother just died, so everyone was supposed to be sad, not happy! I suppose that in Islam and Christian burial ceremonies, the priest or imam speaks alone, while everyone else is quiet. Then he speaks about all the good and all the bad things the dead person has accomplished. For me, this is more adequate.

We both listened to Tony quietly, wondering if many other Chinese people reason like our guide. For a moment, I wanted to ask Tony if he has ever heard of the religion of Cao Dai and what he thinks of that. But before I got a chance to raise my question, we moved on to the room located behind the reclining Buddha.

There, I stopped aghast in front of a huge mural. It depicts the story of the Tang Dynasty monk Xuanzang, who traveled to India to obtain sutras with the help of his three disciples. Oh, you know the Journey to the West? Tony was clearly surprised. He quickly added: so, you also know that according to the 16th century novel, the monkey is the smartest of the monk’s disciples? Yes, I announced happily. I used to watch the TV adaptation of the Journey to the West with my grandmother when I was a kid and I loved the Monkey King!

Seeing me all excited, our guide explained that this mural was painted 300 years before the novel was published. And on this painting, experts have found out that the pig was actually the smartest of the monk’s followers. Astonished, I moved forward to examine the mural, as if I could have found out more about this revelation through the paintings’ details…

Wait, there is yet another fascinating thing you can discover here in Dafo Temple! Clearly, our guide knew how to keep grabbing our attention. Behind the mural, he showed us a small private staircase which led to the top of the temple. Built for the emperor’s son who often came to pray Buddha, this staircase was meant to lead the emperor and his son to the highest floor, where they could be on the same level as Buddha. In this way, the emperor could show everyone that he was chosen by Heaven. He was therefore claiming the same rank as Buddha and did not consider himself below Buddha to any extent.

What is your opinion? we asked Tony. Do you think that emperors and kings are chosen by Heaven or God? Our guide guffawed and moved towards the temple’s main gate. That was a clear sign that he didn’t want to answer…

As we walked past the gigantic incense burner, a little girl jokingly held up three burning incense sticks towards her brother instead of turning towards the temple to pray the Buddha. Her giggles soon turned into loud laughter as she inclined her head towards her brother, who seemed to be having great fun to be prayed at. Their grandmother was putting her joss sticks in the incense pit. But it didn’t take her long to notice the whole scene and to yell at her grandkids from afar… 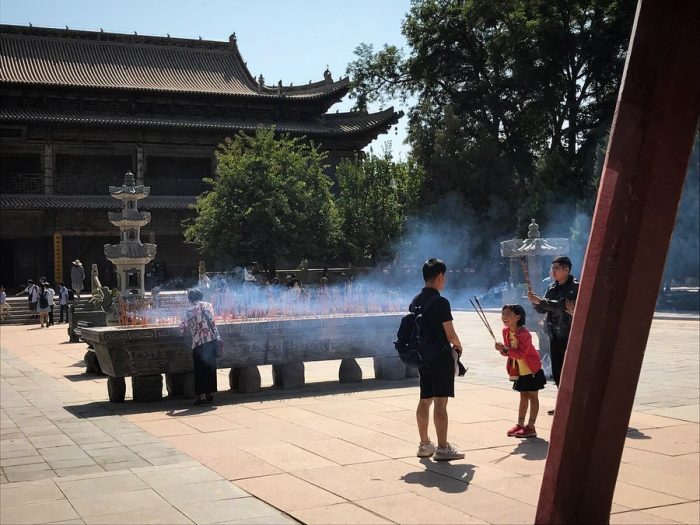 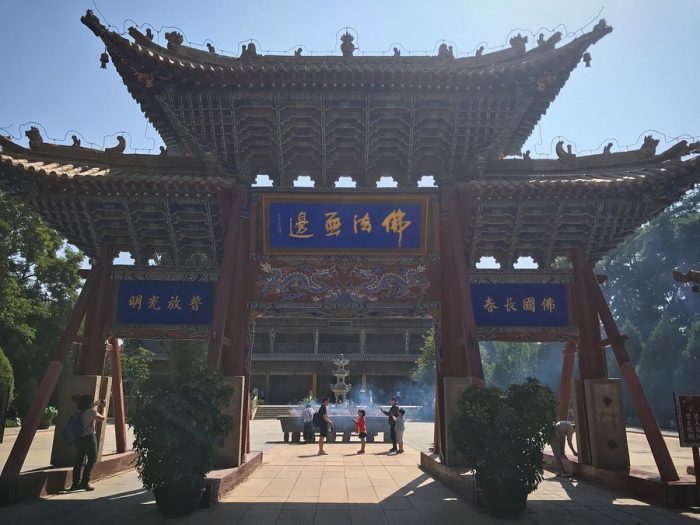 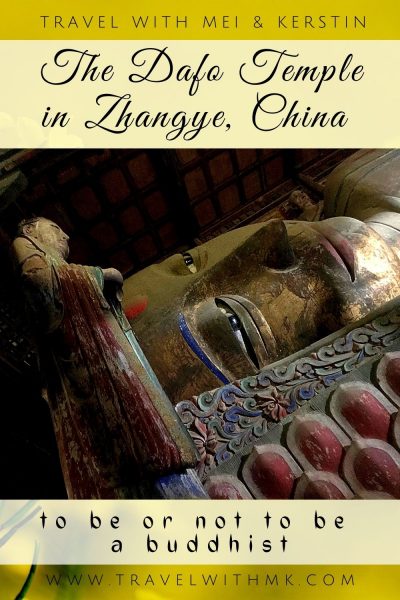 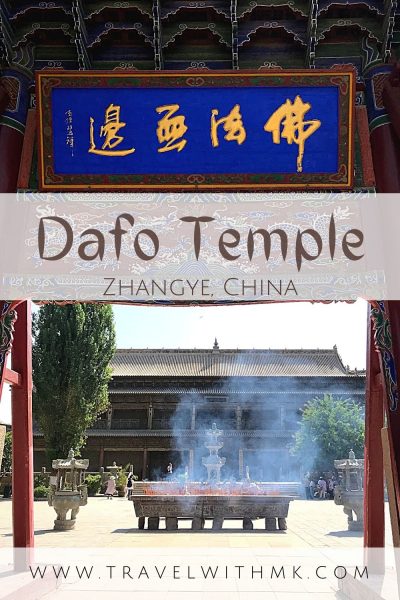 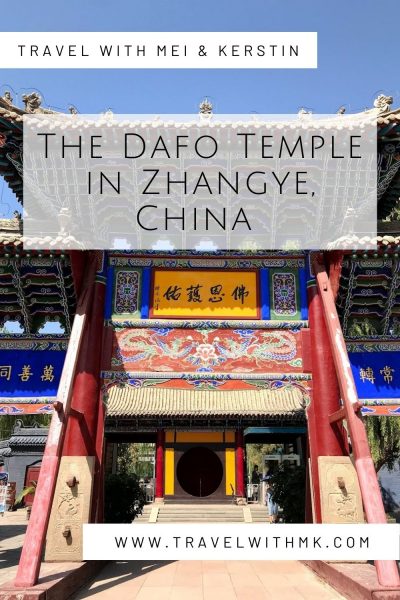