Eating our way through Crete

Let food be thy medicine and medicine be thy food. – Hippocrates

I just climbed out of the shower as Kerstin almost ran me over. Oh my god, I just made a very old woman run uphill!, she exclaimed. She had been sitting on our guesthouse’s rooftop, observing the deserted Lasithi Plateau, and listening to the gentle rustle of the breeze. Then, from the rising but faint sound of bells, she had figured that a few goats were approaching. But first she had seen an old woman in traditional black headdress, walking uphill with her 4 goats on a leash. The billy goat then peered upwards to the rooftop terrace and saw Kerstin leaning on the railing. The goat instantly panicked, broke loose from the leash and ran off. And off went the other goats too… The poor woman then had to give them a chase.

During the next couple of days, we tried to guess the woman’s age. 70? 80? 90? And yet, she kept walking swiftly up and down the streets, dragging the goats behind her, several times per day.

It must be the Cretan Diet!

At the Vilaeti guesthouse on the Lasithi Plateau, we both tasted the best salad mix ever. Lettuce, slices of green apple, olive oil, balsamic vinegar, and a sprinkle of white sesame. Simple stuff. But oh… was it delicious! It took us back to our childhood, when it was still common to plant vegetables in your own garden, that had a unique flavor. One that you would not really find now, not even in organic produces. And here in Crete, it suddenly all came back to us: a salad is not just a salad. It is a whole composition of poetic additions.

The traditional food on the island of Crete is not only famous for being healthy and nutritious. But it’s even renowned for being miraculous. Apparently, the Cretan Diet has proven to prolong life by reducing diseases. According to a comparative study, which monitored the health of a group of 700 men in Crete over a period of 30 years, Cretans had the lowest percentage of deaths compared to the groups living in 6 other countries. The secret formula of the Cretan longevity is mainly attributed to their daily dietary habits. Of course, people in Crete also eat non-local, and processed food.

But their secret is to consume fresh food produced locally as much as possible. Some produces that grow wild, such as artichokes, apricots or vines, are picked and eaten the same day. Watermelons, oranges, lemons and grapes are plentiful. Fishes and seafood are caught the same day or only one or two days before.

During our 3 week-long road trip through Crete, we embraced the Cretan Diet wholeheartedly. From Chania to Itanos, we tried out dozens of restaurants that serve fresh local food. Among the excellent ones, we have picked out a few that conquered our heart, not just for their exquisite food, but also for the places’ decor and location.

Upon our arrival in Crete, we headed straight to the southern coast of the island, where we spent the first week of our trip. Plakias, which used to be a fishing jetty up to the 1960’s, is now a little quiet town not far from the gorges of Prevelli and Kourtaliotis. Several taverns are lined up along the main street of the village, overlooking the crescent bay and its quiet waters.

One of these taverns, called Muses, rapidly became our favorite restaurant in Plakias. Apart from the extremely welcoming and friendly Takis who never refused to share a raki with us, we loved the extensive menu that Muses offers. Our absolute preferred dish at Muses is definitely the daily catch.

From Plakias, we took the winding mountain route towards Frangokastello and Chora Sfakion. On our way, we stopped several times for the scenic views of the Libyan Sea. And then right before entering the little town of Argoules, we recognized the Taverna Strofi.

We first lunched here 7 years ago, and loved both the peaceful atmosphere and the authentic Greek food. Nothing has changed at this family owned place since then, except for both the owners’ and our age. The traditional grilled eggplants, fresh tzatziki, and fried meatballs were the best we’ve had in Crete. Kerstin was also very fond of the traditional Greek pancake – all flat and silky – with whipped goat cheese and drizzling with mountain honey.

Although quite touristy during the summer, we loved the colorful village of Matala. Located not far from the archaeological site of Phaestos, Matala is mainly famous for its artificial caves created during the Neolithic period. Used as tombs by the Romans, they were occupied by the hippies in the 1970s, such as Joni Mitchell, Cat Stevens and Bob Dylan.

As we walked to the end of Matala, we entered the half-covered restaurant-bar Akuna Matata. With the eccentric hippie decor, the reggae music, and the beachy Caribbean vibes, we felt like being thrown back to a bygone internet-free era. The slow service allowed us to unwind and chill in front of the fantastic setting. Compared to other places in Matala, the menu of Akuna Matata includes several less-traditional Greek dishes, such as the delicious rare rump steak with pineapple sauce (called “Hawaiian steak”). That’s probably because the owner is originally from Belgium. The grilled Sardines also tasted exquisite.

In 2009 I spent a couple of weeks in the Eastern part of Crete for archaeological fieldwork. This year, I finally made it back to Itanos and Sitia, to show Kerstin all the archaeological sites and magnificent hidden beaches I had been to. Compared to central and western Crete, the area east of Agios Nikolaos has not been hit by mass tourism yet.

In the evenings, we strolled along the seafront in Sitia, watching local kids playing hide and seek (how good to see children without an iPad or iPhone!), and elderly people walking hand in hand. Among the restaurants at the seafront, our favorite is the Thalassa Café and Restaurant. Kerstin has never been a big fan of pasta. But here, she adored the fresh seafood spaghetti!

While most people like to stay in Agios Nikolaos or Elounda, we preferred the quiet little town of Plaka, located about 5km north of Elounda. It used to be a tiny fishing village, and started to be visited since a couple of years only.

Upon our arrival, we were amazed by the crystal blue waters of Mirabello Bay, and especially the charming terrace of Captain Nikolas Fish Tavern. The owner Nik asked if we were interested in a seafood plateau, and made us follow him to the kitchen to glimpse at his daily catch. After checking out all the other taverns’ menu, we finally decided to return to Nik, where we feasted on delicious grilled fishes, right opposite of the stunning island of Spinalonga.

When I went to Crete in 2009, I was totally impressed by the hundreds of white-sailed windmills on the Lasithi Plateau. They have been used for over 2 centuries to irrigate the fertile plateau, located at an altitude of 840m. Today, most of them have been abandoned in favor of electric pumps. At first, I was a bit disappointed to see the change of landscape. But fortunately the quiet atmosphere in the small mountain villages has not changed.

At the traditional Vilaeti tavern and guesthouse, we were served with the freshest vegetables and seasonal fruits we have had since we were kids. All the produces and ingredients, from breakfast to dinner, were local and organic. Being high up in the mountains, the dishes were quite different from the ones we tasted at the coast, so there was of course no fish, nor seafood. But their lamb roasted with fresh herbs in a traditional oven, homemade bread and goat cheese, and local tomatoes and salads were true delights. The authentic food at Vilaeti Tavern really exceeded our expectations!

During the last days of our road trip, we stayed at Kalathas Beach in the peninsula of Akrotiri, about 20 minutes away from Chania and less than 10km from the International Airport of Chania. The white sandy beach is not as spectacular as in Balos or Elafonissi, but certainly less touristy. Apart from a couple of French and Italian travelers and some local families, we had the clean turquoise waters all to ourselves. A true paradise on Earth!

Right across Kalathas Beach, the fish tavern Ta Skalakia curls up into the mountain. Opened 30 years ago, this family-owned place is located on a hill and dominates the beautiful bay of Kalathas. Honestly, no other setting could have been better to end our 3-week-long trip. Savoring grilled shrimps in front of a perfect sunset view made our last night in Crete truly unforgettable. 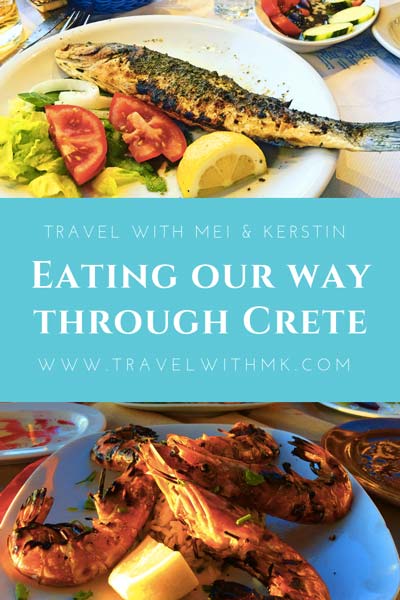 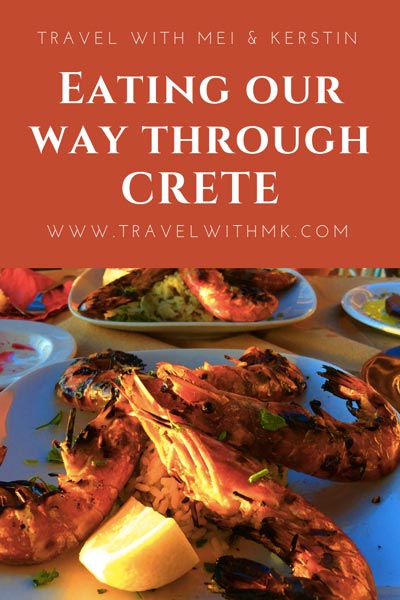 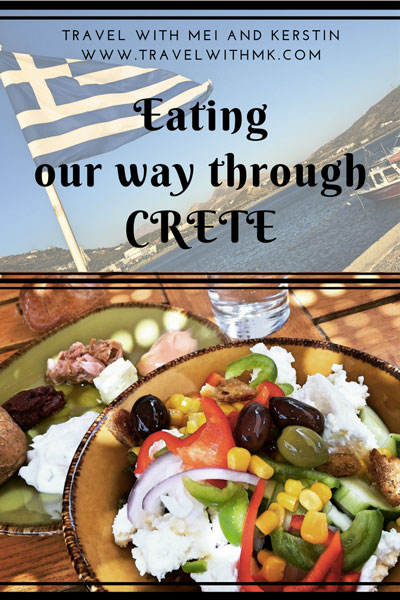 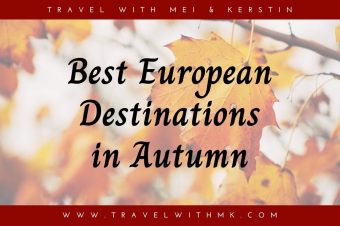 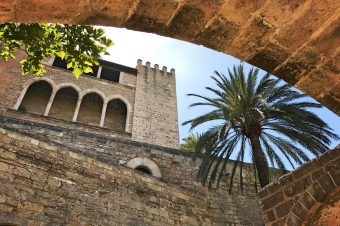 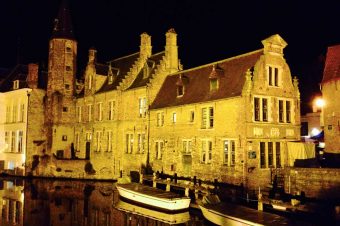