The Whispers of Chan Chan

Chan Chan absorbed part of my soul and has haunted me for years.
It’s a city that will live on forever, because once seen, you can never forget it.

When I was 16, I won a scholarship financed by the Spanish Embassy in Luxembourg and embarked on a study tour with the Ruta Quetzal.

Our main mission was to ensure continued peace between Ecuador and Peru. As young ambassadors of peace, we trekked across both countries, slept in tents and military bases, rode in army trucks and civilian buses, and visited ancient settlements but also presidential suites.

6 weeks of adventures. A dream coming true. But being on the road changes you immensely. Before leaving Luxembourg, I barely spoke Spanish. When I came back, I could only think in Spanish. It took me months to readapt to “normal” life. Even now, the nomadic pulse is still beating. It would take a lifetime to write about this life-altering experience. But let’s start with a place that continues to haunt me:

The Enchanting City of Chan Chan 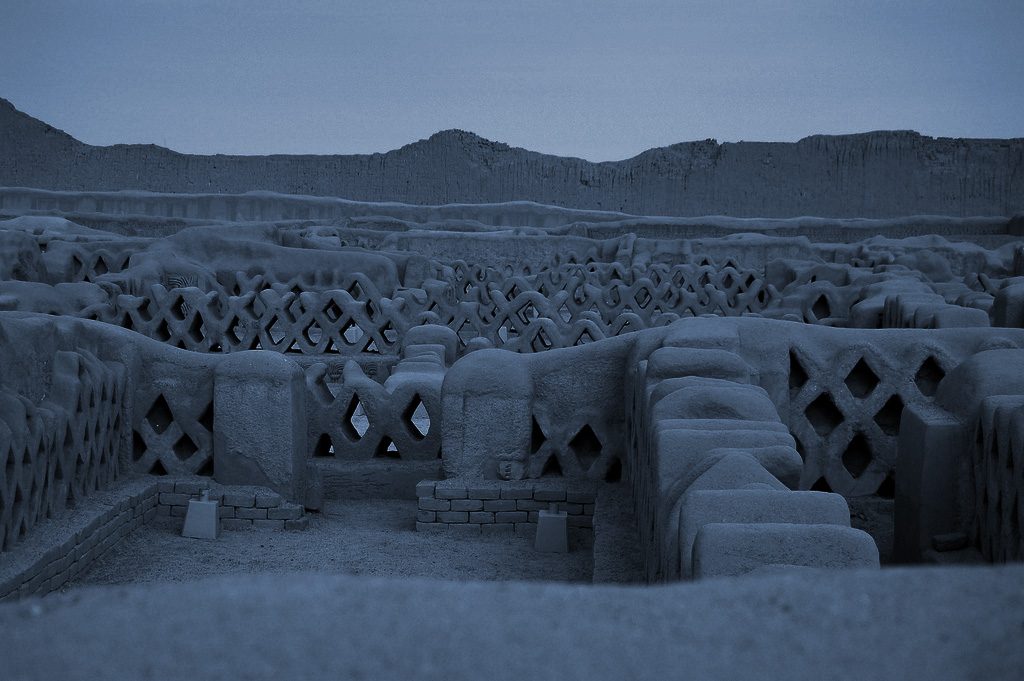 It is an ugly truth: some travel destinations are trendy, while others never will be. How come we all know about Machu Picchu but ignore all about Chan Chan? The latter is after all the largest pre-Columbian city in South America!

This adobe metropolis was in fact the heart of an empire that stretched 965 km from what is nowadays southern Ecuador down to central Peru. Located close to the Pacific coast city of Trujillo, Chan Chan was the capital of the Chimú civilization, which lasted from 850 A.D. to around 1470, when the Incas conquered the city.

Marketing gurus might not like the Peruvian region of La Libertad as much as Machu Picchu, but one thing is sure: those who have seen Chan Chan will spread the word. Hopefully this minority can start making amends.

Because Chan Chan has been plundered, ransacked, hit by earthquakes, flooded, and exposed to storms caused by El Niño. It’s a city that on top of all those terrible attacks still stands, but also a city that wrongfully continues to be ignored.

So what did we do in Chan Chan?

Before heading for the archaeological site, we had spent the whole day in Trujillo and in the Huacas del Sol y la Luna. We were dirty, exhausted, and covered in desert dust. The dinner was modest, but we were happy to sit down and rest. We all began to set up our tents in a crescent-shaped bay that was part of a protected area of reeds (called totora in Spanish). We were all so ready to go to sleep.
But then, Luna, the chief monitor, gathered all members of the expedition: we would set off on a nocturnal excursion and trek to the ruins of Chan Chan!

You must be kidding?! Why do we always have to walk in the dark?

Looking back at this, I realize it was in our best interest. In daytime the desert-like climate would have endangered our health. The need of water increases, the pace slows down, and finally the heat waves disorient you. Whereas in nighttime, the sand is humid and the air refreshing. Of all the treks we made during this 6-week expedition, this one finally turned out to be one of the easiest.

350 teenagers made this journey in the dark. We all walked in silence, mesmerized by the ever-changing display of the night sky, with celestial colors and stars blending in. I can’t remember how long we walked. But what I do remember is the moment we arrived in Chan Chan.

The wind was howling. Gigantic spotlights had been installed at strategic locations.
Once they’d been lit up, a colossal archway with statues on each side towered in the sky. 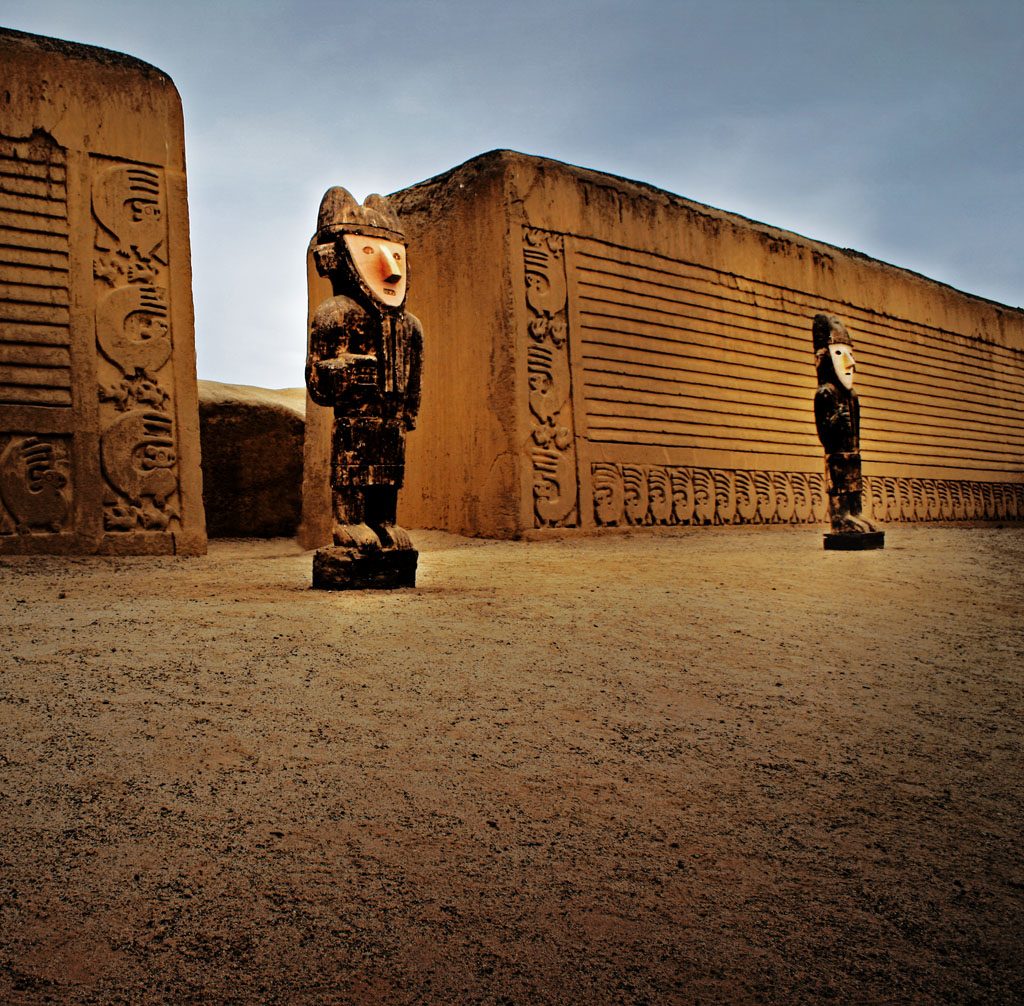 We split up in several groups and entered the archaeological site. Soon we stepped into a huge patio, surrounded by walls made out of adobe bricks of up to 20 meters. With my torch, I lit the walls, and discovered they were carved: stylized birds, squirrels, pelicans, shellfish, crabs, turtles, sea monsters, but also the moon in all its phases, were all looking down on us. I will never forget those storytelling walls. They narrate the battles fought by humans against nature. They illustrate how the sea and the moon played an essential role in the Chimú cosmogony.

Unlike the Incas, who worshipped the sun, the Chimor people worshipped the moon. It was believed to be more powerful than the Sun, as it controlled the sea and the growth of crops. Animals and birds, but also children were sacrificed to the moon.

We continued north. Our monitor shed light into a maze of passageways and chambers. It was easy to end up getting lost in this labyrinth. Suddenly a gust of wind found its way through the corridors. We all stopped to listen to its strange mumble. It was as if the desert sang.

I’m not a superstitious person. But as I was captured by this peculiar acoustic effect, a film roll began unfolding in my mind. I saw Chimú warriors getting ready for battle. A group of men, dressed in ceremonial cloaks, blew into a shell trumpet.

Can you hear that? I asked, surprised at the sound of my own voice.

The girl next to me nodded. She too was mesmerized and couldn’t move. The film roll continued playing. I saw hundreds of warriors marching in perfect rows. Some women were offering gifts and tributes to the Gods. Those who followed the cortege carried weapons and amulets.

There’s no doubt: places like Chan Chan open you up in a strange way. They lift the lids of your creativity and unlock the power of your mind. They make you ready for what lies beyond of your comfort zone. As we pulled ourselves together and passed through the Recinto Funerario, where El Señor Chimo and his wives are buried, the same girl next to me suddenly asked:

How come we can’t hear the others? Where are they? Why don’t we run into the other groups?

The monitor just shrugged, but I had the feeling he was completely lost. And the girl was right. More than 350 teenagers were currently roaming through the ancient city, but we could not hear them nor see them. Later on I found out that the ruins cover no less than 6 square kilometers. It was impossible for us to hear a single sound besides the howl of the wind. The thick walls muffled all the other sounds.

We wandered now through a labyrinth of workshops where the remaining walls were too damaged to be high. That’s when at last we heard the sound of people marching close by. A second group emerged from behind a statue. Their monitor urged us to walk back to the exit: It is time, he said. We have to retreat before the desert foxes show up. Peruvian desert foxes, also called Sechuran zorros, are nocturnal. Carrion is part of their diet. He’s kidding, right? One of the boys seemed shaken up. He was certainly not the only one. Because nobody replied. 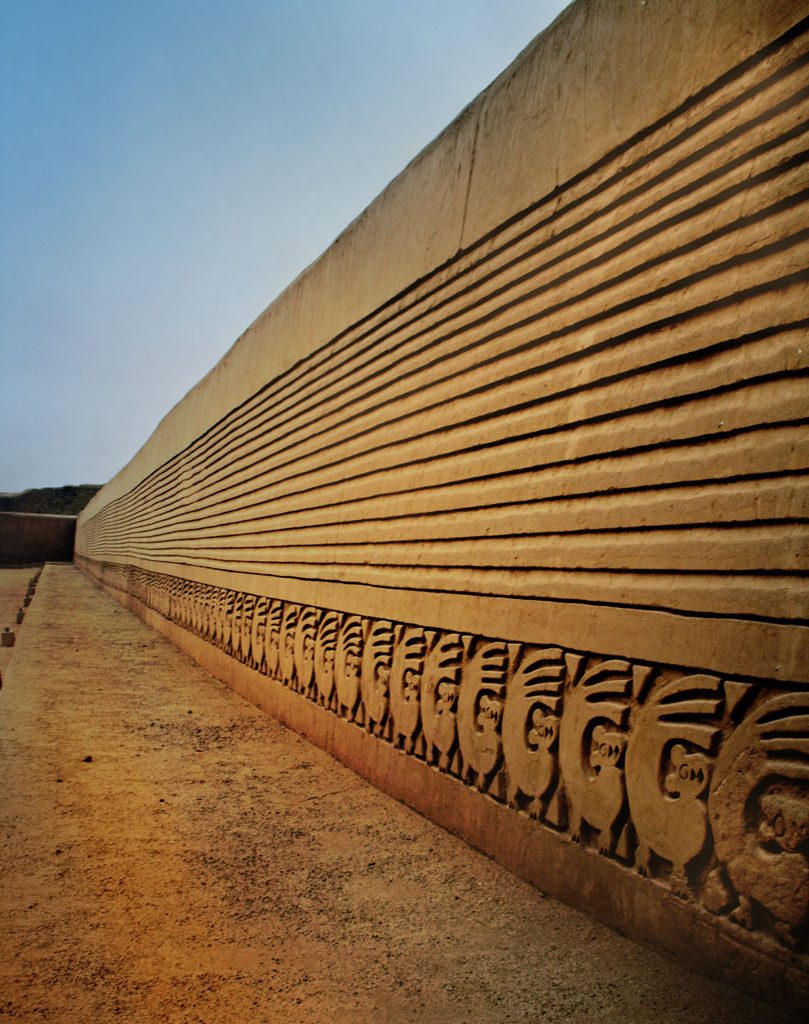 Together we wandered through the narrow passageways. It was pitch dark. Everyone was silent. Listening, as the whispers of Chan Chan grew stronger. The tension was tangible. What if we wouldn’t make it in time? What if we wouldn’t find the exit? Would we forever wander and sleep among the buried mummies?

I kept looking behind me to make sure the others were still following. And so did they behind me. It seemed like an eternity before we suddenly saw the light at the main gate. Perhaps it was only my impression, but I had the feeling that everyone walked faster, almost ran to the gate. And then, as if by magic, the sounds of human laughter and talking reappeared.

Even now, after so many years, I sometimes wake up at night, wondering what might have happened had we not found that exit after all. Would I still want to go back to Chan Chan? Hell, yes! And even more than once! Maybe not at nighttime though. 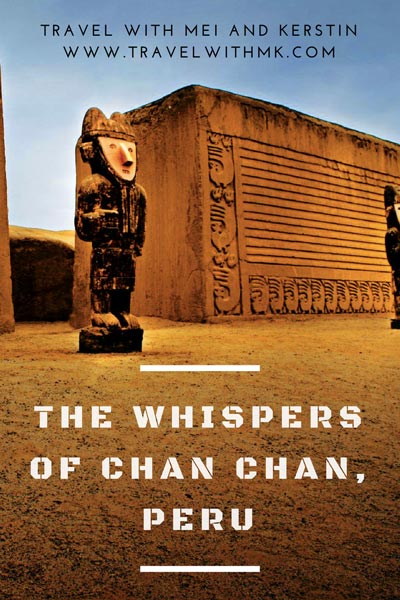