The Temple of Cao Dai in Cai Be

A Vietnamese Religion that dreamt the End of Religious Wars 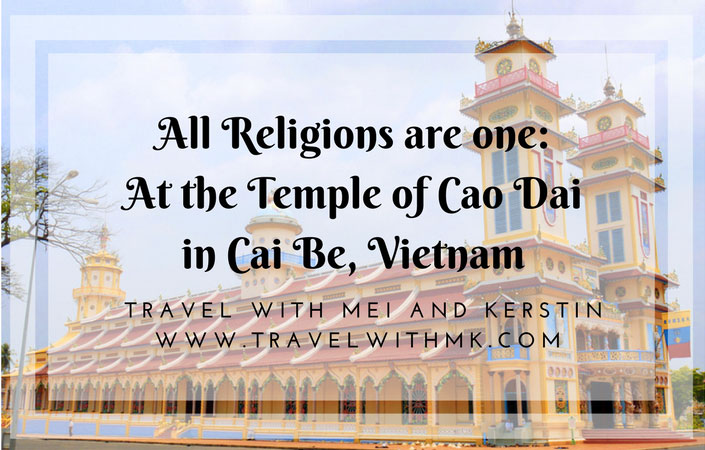 After spending three days in Ho Chi Minh City, we headed south to Vietnam’s Mekong Delta and stopped in Cai Be. Although the weather was cloudy and murky, we vowed to see something once we arrived at the Floating Market. Our guide knew that a storm was coming… probably estimating how much time we still had until it started pouring. Then his face suddenly lightened up.

Have you ever heard of Cao Dai? We shook our heads. OK. First, what do you know of our beliefs here in Vietnam?

We suddenly felt like ignorant schoolgirls. Mei explained that she grew up as a practitioner of Buddhism, Confucianism and Taoism – or something in between. But she had to admit that she never understood why her family practiced a mixture of these three religions or doctrines.

Oh, I see, he nodded. In Vietnam, this is called “Tam Giao” or the “Three Teachings”. It’s not one uniform religion, but many beliefs. Here, many people also practice the Three Teachings. We respect the Taoist doctrines when we cook and build our houses. We pray Buddha when we seek peace and enlightenment. And we use Confucianism to explain harmony and social order. But there is another religion here in Vietnam, which embraces more than just these three doctrines. It’s the religion of Cao Dai.

Cao Dai, he continued, is often said to be a monotheistic religion. But to me, it’s a global religion. It embraces Hinduism, Judaism, Zoroastrianism, Buddhism, Taoism, Confucianism, Christianity, and Islam. The basic principle of Caodaism is “All Religions are One”.

Our guide paused to see the effect of his words. He had captured our attention, for sure. Yes, it is difficult to imagine how such a religion can exist nowadays. We live in an age of religious intolerance. But when Ngô Văn Chiêu founded Cao Dai in 1926, Vietnam was already struggling to find the right balance between the Western and Eastern worlds. Many syncretic movements were born at that period. Not all survived, but Caodaism did. Do you see this double tower on the horizon?

We both gazed out of the car’s window. The first raindrops started falling. The skyline was populated with landmarks competing to stand out. Among them, we spotted two colorful towers.

If you want to, we can visit a temple of Cao Dai before heading to the Floating Market. And in this temple, I’ll show you the Vietnamese dream. A dream made of peace and love. We looked at him and smiled: You are quite the poet…

Five minutes later, we stopped in front of a colorful building that looked like a church built by a Mozarab in California, to feature in a spaghetti Western movie. Completely surreal!

Rain was pouring down now. We ran to take cover, and passed under the temple’s front portico where a Divine Eye looked down at us. We followed our guide along a dazzling display of eccentric architectural elements, and entered the building from the left. Inside, we discovered a mosque-like green marble-tiled floor. We walked with caution, to avoid stepping on the blue silk cushions placed in front of an altar. Above the altar hung an image of the Divine Eye in a large elaborate golden frame.

Our guide must have noticed our puzzled look. He moved closer to the representation of the Eye, and explained that Cao Dai is to be translated as the “Highest Power” or “Highest Lord”. The symbol of the Divine Eye or All-Seeing Eye serves to remind the believers that the “Highest Lord” – or God – is everywhere.

As you can see, there are many colors in this temple, he said. Blue stands for Taoism, red for Confucianism, green for Islam, and yellow for Buddhism.

At the far end of the sanctuary, eight columns entwined with multi-colored dragons supported a dome representing the heaven. Above the altar of the Divine Eye, we found the portraits of several figures: Siddhartha Gautama, the founder of Buddhism, Li Taibai, a fairy from Chinese mythology, Jiang Taigong, a Chinese saint, Lao Tze, the founder of Taoism, Guangong, a Chinese God of War, and Guanyin, the Goddess of Mercy. Further, we recognized Jesus and Moses. And on both sides, there were more figures…

Wait a minute! That fellow over there… is that…? Yes, that is Shakespeare. Over there is Victor Hugo – he’s holding a quill. They are holy spirits, like prophets. And there is another prophet in the Cao Dai pantheon that comes from Europe. She’s not pictured here, but you certainly know her too: it’s Joan of Arc.

Standing in the middle of this temple, we both didn’t know what to say or think. We’ve visited many temples, churches, cathedrals, monasteries around the world, but no one has struck us as much as this one. What surprised us even more was the fact that there are between 4 and 6 million Caodaists in Vietnam alone. And there are tens of thousands more adherents of Caodaism outside of Asia.

Truth be told, Caodaism may be kitsch or pragmatic. But in a world where religious wars are an on-going reality, it doesn’t hurt to embrace diversity, does it? When we left the temple, we couldn’t help wondering why this idealistic religion never makes the headlines, while infamous fanatic groups are taking center stage in the daily news.

What about you, have you ever heard of Cao Dai, or visited a Cao Dai temple? And what is your take on a global religion that integrates all religions, and shares one common message of tolerance and love? 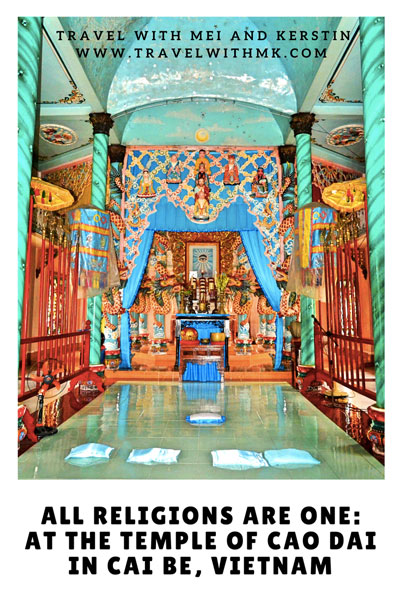