White. An endless ivory carpet stretching for miles and miles up to the horizon. ¿Puede bajar la ventana por favor? Richard nods and opens the badly tinted window on my right side. I put my face out to breathe in the fresh cold air – the SALTY fresh cold air! I squint my eyes and look as far as I can, where the unending white ground meets the spotless blue sky in a shiny silver skyline. Next to me, Kerstin squeezes my hand. We both smile like two happy kids who just got a handful of sweets. Finally, we’ve made it to the Salar de Uyuni!

Getting to the Uyuni Salt Flats was an long adventure. We were supposed to start this trip the day before. But things don’t always go as planned in Latin America. Patience is the key word, especially in Bolivia.

No worries, the airport is only 30 minutes from your hotel! Marta seemed very confident. After all, she’s a local from La Paz, Bolivia. So, we trusted her and got ready for the transfer at 7am.

But La Paz has 1 million inhabitants. And there’s 1 million more in El Alto, the “upper city”. Traffic is crazy and air pollution is almost unbearable in this city. Less than 10 minutes after we left our hotel in La Paz, I knew that we wouldn’t make it to the airport on time. In slow-motion we maneuvered around a car accident on the freeway. All the roads were instantly blocked. Our driver Raúl did his best to find an alternative way. He looked calm, but we could sense that he was nervous as time went by.

We drove past the richest neighborhoods, where huge villas with manicured lawns look like an immaculate suburb in Southern California. But we also raced through many deprived areas where poverty is truly critical: slum housing, mountains of trash, dead dogs along dirt roads… Instead of 30 minutes, it took us almost 2 hours to arrive at the airport.

Thanks to Roberto from our travel agency Peru Inside Out, who explained to Marta that she must find a solution and modify our whole itinerary, we got another flight to Uyuni in the evening. Our 3-day-tour through the salt flats and colorful lagoons started without us at 11am that day. So, Marta ended up offering us a private tour with Richard and his (antediluvian) jeep on the following day.

The good thing is that you don’t need much explanation when exploring the Salar de Uyuni. The beauty of this vast scenic place speaks for itself. So, we politely said no whenever Richard asked if we had a question, and let him continue listening to his 90s mix of pop and salsa music.

From time to time, Richard would stop the jeep and tell us to climb out. ¡Fotos, chicas! He’s not very communicative, but maybe it’s because he would have preferred to have another career. We quickly guessed that our driver probably wanted to become a photographer or maybe even a film director. Together with his friend, who drove a group of 7 in another jeep, Richard suddenly announced he wanted to shoot a movie of us. He instructed us what to do and drove his jeep around us with one hand, while his other hand held my iPhone. That clip is stunning, just like all his photos of us.

During the dry season (May to August), the surface of the salt flats crack into geometric patterns. This is what we saw at first when Richard accessed the salt flats. An endless white carpet with crystalized hexagons.

But after driving for half an hour, the surface got more watery. Normally it’s only during the rainy season (December to April) that a thin layer of water covers the salt flats, turning the white carpet into a reflective mirror-like surface.

Now we finally had a pregunta for Richard. How come we were honored to drive through these mirror-like salt flats when it was not the rainy season? He turned down the volume of his music. The salt flats look like this, because it rained a little bit several days ago. He opened my window, and the fresh cold air – less salty now – put another cheeky smile on our face.

Unlike my window, which could only be opened by the driver, Kerstin’s window was totally broken and couldn’t even be opened. Richard must have sensed our tiny bit of discontentment, because he suddenly stopped the car. ¡Más fotos, chicas!

As we stepped out of the jeep, there was one thing that immediately struck the both of us: the utter silence. Quieter than the stillness of eternal night, or the hush of early dawn. The only sound we heard was the noise of our feet stepping on the watery salt flats. It was magical.

Long puffy clouds were sailing through the cerulean sky. And their twins were sliding over the watery ground.

Standing amid the Andes, we are where heaven meets earth. This is our paradise. A wisp of eternity. Speechless, we clutch the fleeting impression tightly. Wondering whether we will ever be able to put in writing what we merely sensed. A wisp of eternity, isn’t that a treasure to hold onto?

Check out other unforgettable experiences we made in Bolivia. 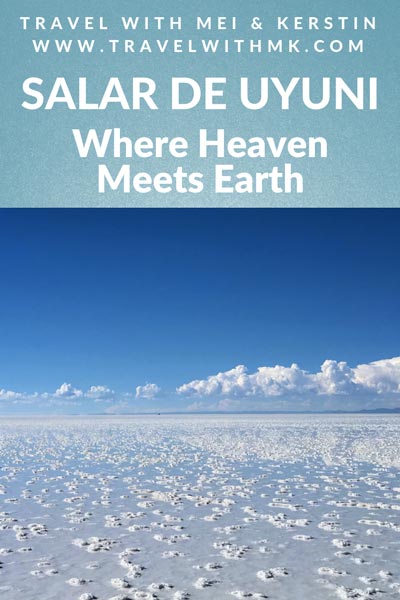