How Dutch cheese conquered my heart

“Look at my face. I have a beautiful, young and healthy skin, right? That’s because I’ve been eating cheese all my life!”

The cheesemonger’s face was full and a bit reddish. Just like the giant round cheese he was barely managing to keep a grasp on. Behind him hundreds of giant round Dutch cheeses piled up, equally distributed on wooden shelves that covered half of the Henri Willig store. A myriad of cream-colored and yellow-daffodil gave off a glow of light. But the cheese was not solely on display to be sold. It was sweating profusely, yielding strong scents of ripening and maturing. A huge wooden cask was located at our feet, as well as cheese molds and wooden paddles, meant to stir the milk. The upper level of the shop indeed looked like a fancy dairy pantry.

“To make sure that only the right amount of moisture evaporates from the cheeses, they all have a thin plastic coating. That would be the colorful “envelope” of the cheese that we don’t eat.” The cheesemonger smiled again. His round cheeks continued giving off a sympathetic reddish glow.

“Depending on the age of the cheese, it can be left on the shelf for ripening between 21 days to over 1 year. To slow down the ripening of a cheese, the plastic coating will be topped by a layer of paraffin.” He knew by the look of our faces that he had lost us, and quickly added: “ That is wax used to help the cheese in its aging process. Usually the wax is colored too.”

While listening to the cheese expert revealing the whole process of cheese making, we kept tasting slices of various kinds of Dutch cheese. We never thought we could eat that much cheese. It was way too cold to stroll through Amsterdam anyway. So we kept eating, listening, engulfed in this cozy atmosphere, and followed the cheesemonger around the store to explore more cheese varieties.

When we finally stepped out of the Henri Willig store with several bags of cheese, we were greeted by a bone-chilling December wind. The crowded flower market across the street certainly looked enticing. But as soon as we saw the sign of the Old Amsterdam Cheese Store, and that of the Golden Age Cheese, we literally scampered through the streets to join their warm and inviting vibes.

To be honest, I can’t remember how many cheese shops we “visited”. Many of them were of the same brand, offering only a slight difference of products. But the flamboyant cheese stores reeled us in every single time.

For someone who (supposedly) has lactose intolerance, I found that my body reacted quite well to the huge amount of cheese devoured in a day!

Moreover, Dutch cheese had never been one of my favorites before we visited Amsterdam. Compared to French cheese, they are younger and usually have a much harder texture. I had always preferred soft-ripened, as well as blue cheese, such as Roquefort or Camembert, with their sturdy tang.

But after savoring all the cheese types in Amsterdam, Dutch cheese has found a special place in my heart now. After all, there must be a reason why the Netherlands is the largest exporter of cheese in the world. I have to give them some credit for that!

My favorite cheese tasted and bought in Amsterdam is definitely the “old” Gouda cheese (aged for 2 years), relished with a drizzle of Dutch apple syrup. And the Picobello, an aged goat’s cheese from Heeze is also ambrosial.

What about you? Have you ever experienced a cheese tasting in Amsterdam? 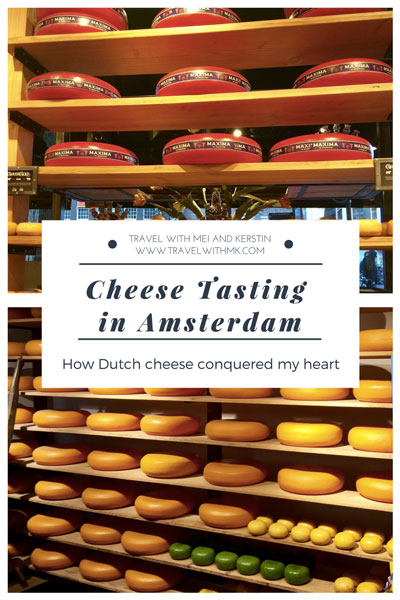